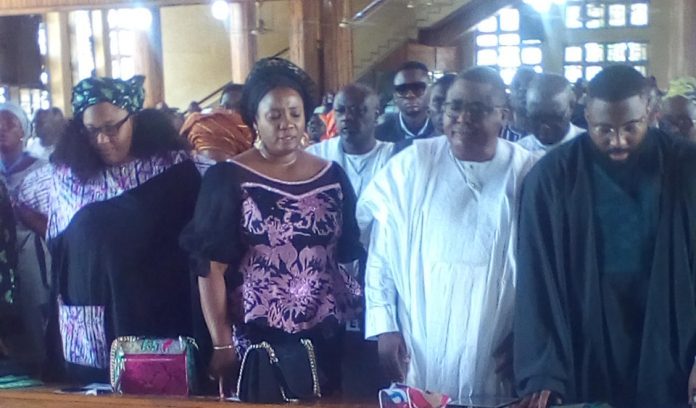 Kwara State deputy governor-elect, Mr. Kayode Alabi, has promised that the incoming administration of the governor-elect, Alhaji Abdulrahman Abdulrasaq, will not fail the state when it is eventually sworn-in on Wednesday.

Although he said the first battle of election had been won, he urged the residents to still pray consistently “because there is still a battle ahead, as the people we will take over from will not rest.”

Alabi, who spoke at the interdenominational thanksgiving service and special prayers organised for him at the First ECWA Church, Taiwo Isale, Ilorin, the state capital, on Sunday by the state chapter of the Christian Association of Nigeria (CAN), regretted that despite the abundant resources of the state, it remains one of the most backward in the country.

Alabi, who attended the service with his wife, Tokunbo, and his children, recalled that an unidentified ambassador he was once introduced to stared at him for about 15 minutes before he eventually said “you Kwarans are lucky because you have been liberated”.

He said another seven hours of praise worship is underway in June.

In his message entitled, “Resolving to make a difference”, the 90-year-old former secretary of the state CAN, Pa O. Ajolore, appealed to the incoming administration to run an all-inclusive government that will look for the best hands to move the State of Harmony forward.

According to him, the “O to ge” mantra that made the All Progressives Congress (APC) win all the recently conducted elections was a protest by the people against the present and past maladministration in the state.

He therefore urged the incoming Abdulrasaq administration “to strive and make a clear difference in the areas of security, health, education, employment ad water supply to the citizens among other problems bedeviling the state”.

Ajolore expressed delight that Alabi was the first deputy governor-elect of the state who had ever come for thanksgiving after election.

He appealed to the incoming administration not to forget the long-neglected rural areas of the state.

Earlier in his welcome address, the state Chairman of CAN, Professor T. O. Opoola, recalled that Alabi had sent a prayer request to the state CAN against bloodshed before and during the election.

He added: “Now that God has answered that prayer, it is good that he has come back for thanksgiving.”

He said with Alabi as the deputy governor-elect, good times await Christians in the state, adding that for the first time in the history of the state, CAN was represented in the Inauguration Committee set up by the incoming administration.

On the occasion, specific prayers were offered for the protection of the governor-elect and his deputy, as well as their family members. Prayers were also offered for peace in the state and the entire country and the success of the incoming Abdulrasaq administration.

The event was attended by many party chieftains and Christian leaders in the state.

Buhari: N’assembly’s adjustment of 2019 budget may affect its implementation