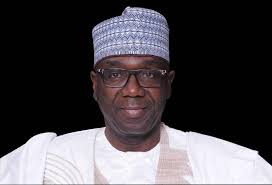 ·         Hails security agencies for their sacrifices

Kwara State Governor AbdulRahman AbdulRazaq on Wednesday made a passionate appeal to Nigerians to never turn their backs or abandon the police and other security agencies, saying the vast majority of the officers are patriots who are equally committed to a greater Nigeria.

AbdulRazaq said the events of the past few weeks, especially the #EndSARS protest, should not be framed in a way that might leave officers and men of the police demoralised or dejected.

Demoralising the security forces, especially the police, might play into the hands of criminals who prefer anarchy to hurt their victims, the Governor warned.

On Tuesday night, he visited various police posts in Ilorin to identify with officers and men of the Nigerian police in Kwara State who he said have mostly been doing well. On Wednesday, he led the three senators from the state — Ibrahim Yahya Oloriegbe (Central); Sadiq Umar (North); and Lola Ashiru (South) — to the police headquarters to cheer the police for their efforts to maintain the peace.

AbdulRazaq had earlier Wednesday held a security council meeting during which he observed that certain interests later hijacked the peaceful #EndSARS protest to push for anarchy and undemocratic regime change.

Apart from the heads of the security agencies in the state, the meeting was attended by the General Officer Commanding 2 Division of the Nigerian Army (Ibadan) Maj-Gen. Anthony Bamidele Omozoje and the Assistant Inspector General of Police (Zone 8) Yakubu Babas. The meeting discussed the security situation in the state which the council observed is back to normal.

“We care about our police and we must not demoralise them. We should avoid using one brush to tar all of them. I urge all Nigerians to stand up and support the police. We need to embrace the Police to do their jobs,” AbdulRazaq said during a visit to Police Commissioner Kayode Egbetokun at the police headquarters.

“I am glad that President Muhammadu Buhari has given instructions that the needful should be done. Their salaries will be increased. Their welfare will be increased and I am sure they would do more to serve us.”

Speaking earlier when the senators visited him to commend his handling of the recent #EndSARS protest and attacks on public and private facilities in Ilorin, AbdulRazaq said he visited some police stations to interact with men and officers on duty and to ask after their welfare.

“We truly appreciate what the Police is doing. We urge them to continue to do their work professionally. #EndSARS was meant to stop Police brutality. It was not meant to become a campaign for police bashing,” he said.

He commended the senators for always standing by the state government and the people at all time.

AbdulRazaq also warned against the menace of fake news, which he said poses grave threats to national peace.

Egbetokun, who described the visit of the Governor and the senators as historic, said AbdulRazaq’s tour of police stations meant a lot to the officers and men of the Force.

“This is a historic visit. I’m excited to be informed that the Governor has been going round police stations to encourage our men. The visit will go a long way in encouraging our men to do more for the state. We have seen what is going on across the country where policemen were gruesomely murdered,” Egbetokun said.

“We are committed to the protection of lives and properties and human rights of the people of the state.”

The three senators also took turns to commend the work of the security agencies, including the police, and said deliberate attempts to demonise and demoralise all of them might have been orchestrated to provoke anarchy in the land.

“The last incident has shown that without Police in the society there will be anarchy. We thank you for your efforts,” Umar said.

Oloriegbe said “there are genuine concerns about the welfare of the Police. We have had discussions around it at the National Assembly. I urge you not to be deterred about what happened. There is always a trying period.”

Ashiru, for his part, commended the security forces for their sacrifices and said the excesses of a few should not be used to demonise everyone.

“We are happy for the work of Police in Kwara State,” he said, adding: “We enjoin you to continue to keep the state safe. We understand your limitations but we must urge to put in your best.”

Chief Press Secretary to the Governor