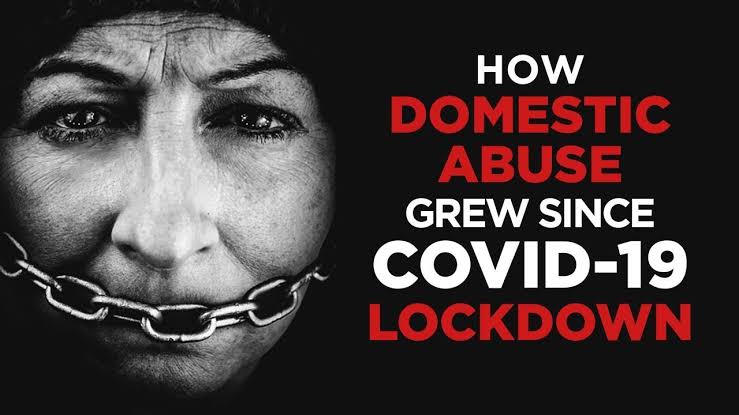 The lockdown imposed by the federal government of Nigeria to contain the spread of COVID -19 for so many people was quite devastating. The move though with genuine intentions saw so many women, especially those who were either dependent or doing menial jobs to survive being locked down with violent partners. At this point, COVID-19 information meant nothing to them as their daily concern was how to escape. Edoamaowo Udeme, reports.

A victim of Physical Domestic Violence.

On why she kept quiet from the first day, Emem said she hoped that he would change but cutting her vagina became the last straw for her. On what medical treatment the baby has received, Emem said she had not received any because she couldn’t afford it but only uses boiled water and made her sit on it. Peter is currently in police custody but one wonders if it will not go the same way other rape cases have gone: that is, under the carpet. Emem who lives in a thatched house was dependent on her husband is in financial difficulty, the little girl who is now 5 years old couldn’t access medical help but has healed a little with traditional medicine.

Your heart will melt when the little girl narrates in Ibibio Language, her ordeal on how she would scream while her dad would beg her and cover her mouth while defiling her with his hands and how excruciating the pain of the scissors cut was. Emem, her mother, lives in penury as she was solely dependent on her menial jobber husband for feeding. Now that he is away in jail, she has her regrets as some family members of the man have blamed her for exposing their brother.

In Emems’ case, she is a victim of Physical, Emotional, Economical, Psychological and Verbal abuse all rolled in one! Her little phone is perpetually switched off as she has nowhere to power it and that type of phone cannot access internet let alone information on COVID -19 related issues. She, like most rural women, believe that COVID-19 is a mere farce. Mentioning and urging them for caution even with the death toll of COVID-19 victims is only akin to passing a Carmel through the eyes of a needle.

Mfon, 38, a university graduate, lives in Eket Local Government Area of Akwa Ibom State in South-South Nigeria is a victim of Domestic abuse by her husband says apart from the fact that she has no phone to access information on COVID -19, she never believed it because she had not seen or witnessed anything COVID -19.

Despite her education and the environmental influence as Eket is the oil-rich Local government, Mfon a teacher, says she was and still is more engrossed in her Domestic Violence issues that almost cost her, her left eye and left ear, than care about COVID -19.  Not until a church member who is a nurse who works at the onshore was down with COVID -19 that she even believed it was real.  The nurse later recovered but she was the only victim as far as Mfon was concerned and right now, she is still very indifferent as she has no access to information or internet to access and keep up the process. She only observes that those strict regulations like using face masks to enter banks, churches and other public places which has recently been reduced, hence, her believe that COVID-19 may be over after all.

Another victim of Physical Domestic Violence.
CASE 3In a small village of Ikot Iwud, situated in Nsit Ibom Local Government Area of Akwa Ibom State, South-South Nigeria, lives Emah. She is in her 60s, has little formal education. She has 4 children all grown, she has been experiencing Domestic Violence from the only son she has. The son not only kicked against her having a relationship but used to beat her up and eventually threw her out of her late husband’s house which was in the neighboring village, Ikot Obio Asanga.

Emah who struggles to survive by farming and doing menial jobs gave this reporter a puzzled look laced with laughter when asked how she is coping and protecting herself from COVID-19. “How can that kind of illness affect me, will it be in my farm or when I am in the market, I can’t even pronounce the name of the illness, I should rather advise you who flies in the air and lives in town to be more careful” on her part, she is willing to sit and learn about anything only if it would put food on her table, otherwise, there is no need pushing it.

There is also Culture of Silence.

In Akwa Ibom, a young girl of 15 was impregnated and has twins for her father, she stays in the same home, her mother is in the know of this incest but she can’t speak out for fear of shame and stigma. All the little girl needs now is rescue, but, who will do so? In most cases, rescue comes but just for that moment, sooner than later, she is left at the mercy of the same person she is trying to avoid all because there is no support system. How then can such a person pay attention to what is happening around COVID-19? If she could be gullible and vulnerable to still stay under the same roof with her molester, how then can’t she be misinformed on COVID-19?

Another major hindrance to information on COVID -19 is religion.

Akwa Ibom State is well known for the practice of Christianity, there is hardly a street that does not have one church or two, everything is hinged on Bible and God. It has gotten so bad that some Pastors have cashed in on the gullible ones, from seeing visions to giving vague prophesies. Sadly, the followers are so blinded that they hardly read the Bible, they only quote Pastors. Some Pastors have openly said that there is no COVID – 19. This explains why most of their followers believe that they can never be infected so long as their pastors have made pronouncements against it.

Slogans like “Not my portion” “Back to Sender” “Die by Fire” rents the air whenever topics like COVID -19 issue is mentioned. In the hard to reach areas, activities were still normal as markets, farms and churches activities were still ongoing during lock down. For farmers and traders, their only source of livelihood couldn’t be thwarted by lock-down so they cared less so long as they pastors pray for their safety.

Domestically violated women are not left out, they stick to churches and their Pastors while expecting a miraculous change of their partners behavior towards them. If they notice a stint of behavioral change, they simply go for thanksgiving forgetting that an abuser can bounce back and may get worst.

Another Victim of physical Domestic Violence.On May 2021, the Lagos state government released a report that 89 husbands who were beaten by their wives while comparatively, 664 cases of battered wives were reported.  The Guardian, Nigeria, stated that “cases of Domestic Violence is on the high, especially the physical aspect of it.  At least once a week, there’s a case of a man beating, maiming or killing his wife, and in some very rare cases, a woman dealing with her husband in like manner”.

With this development, Lagos state Government seems to be the only state in Nigeria that offers swift response to Domestic Violence issues. For instance, Network Against Domestic Violence Foundation (NADVF) received an emergency call from a domestically violated woman. With just one phone call to Lagos State Domestic Violence Emergency Response team and they not only acted but ensured that the culprit was brought to book. If all the States in Nigeria can adopt this approach, then, Domestic Violence would be drastically reduced.

The International Federation of Female Lawyers (FIDA) Uyo Branch in Akwa Ibom State, Nigeria reported that this year alone, 287 cases of Domestic and sexual violence have been reported so far. Ironically this is just a tip of the ice berg as the unreported cases tripled especially in rural areas where the violence is more and they have neither a support system nor shelter while some are not even aware if the existence of FIDA. For instance, majority of Nigerians especially those in rural and hard to reach areas have Primary or Secondary victims or survivors of Domestic Violence. Unfortunately, they will never report for fear of rejection and stigmatization.

The UN Women ED, Phumzile Mlambo–Ngcuka, noted recently that “Even before COVID-19 existed, domestic violence was already one of the greatest human rights violations. In the previous 12 months, 243 million women and girls (aged 15-49) across the world have been subjected to sexual or physical violence by an intimate partner”.

As the COVID-19 pandemic continues, this number is likely to grow with multiple impacts on women’s wellbeing, their sexual and reproductive health, their mental health, and their ability to participate and lead in the recovery of our societies and economy.”

The statement above would explain the rate of misinformation these vulnerable lot would face as they concentrate on escaping or managing bad marriages. At that state of mind, only very few would pay attention to COVID-19 issues especially on caution, vaccines and face masks.