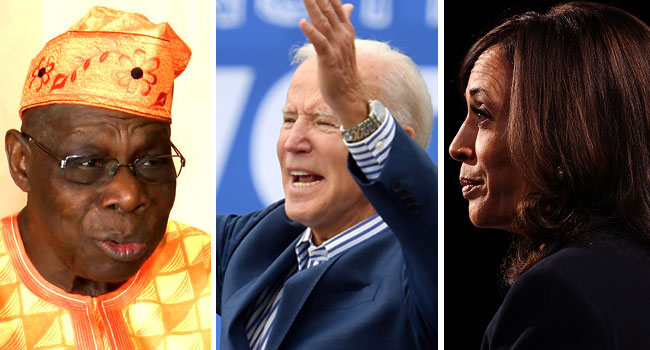 Obasanjo stressed that the victory is not only for Biden and his deputy but for the people of the World. The Nigeria Ex-President noted that the majority of the people had watched helplessly as the world built after the Second World War was being pulled down under the leadership of outgoing President, Donald Trump. Obasanjo according to his congratulatory message to the US President-Elect, which was signed by his media aide Mr. Kehinde Akinyemi, in a copy made available to the News Rain Nigeria tasked the newly elected President to restore confidence in the role of America as the largest economy in the world which he said has very significant responsibility for the peace, security, stability, and progress of the world.

Obasanjo in his message was quoted as thus,  “It is a victory of good over evil and it is not a victory for you and the people of America alone, but a victory for most people of the world, majority of whom watch helplessly as the world that had been steadily and painstakingly built since the end of the Second World War was being pulled down.“I personally believe that the first African-America female Vice President-elect of the US,   Kamala Harris “will have some Nigerian DNA in her as most of those taken to the Caribbean from Africa went from Nigeria of today.He further stated that “Not that the world was perfect and equitable but it was reasonably predictable with some measure of rule of law and respect for international agreements and treatise.”

Biden: I will be President for all Americans