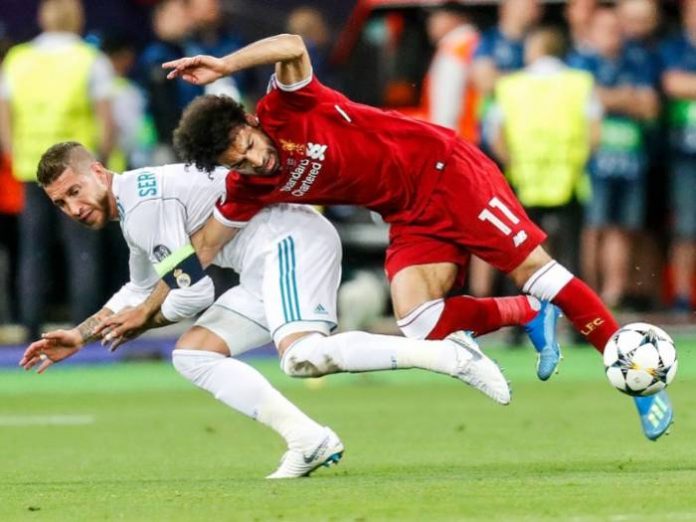 The challenge during the first half of Saturday’s Champions League final went unpunished by the match official but caused Salah to leave the game. Madrid went on to win the match in Kiev 3-1, claiming their 13th European Cup in the process.

“Sergio Ramos intentionally kept Mohamed Salah’s arm under his armpit, causing dislocation of his shoulder,” the petition reads. “Not only missing the rest of the game, but also missing the FIFA World Cup 2018.

“In addition he kept acting that Liverpool players fouled him falsely, causing the referee to give [Sadio] Mane a yellow card he did not deserve.

“Sergio Ramos represents an awful example to future generations of football players. Instead of winning matches fairly, he uses tricks that defy the spirit of the game and fair play.

“UEFA and FIFA should take measures against Ramos and similar players, using the video recordings of matches to keep the spirit of the game.”

It was a very tough night, but I'm a fighter. Despite the odds, I'm confident that I'll be in Russia to make you all proud. Your love and support will give me the strength I need. pic.twitter.com/HTfKF4S70e

Although the petition is in no way binding on the football governing bodies, it’s a symbol of fans’ anger over the incident, particularly in Egypt, whose national team Salah led to their first World Cup since 1990. Salah wrote on Sunday that he expects to be fit for the tournament, easing fears from his home country.

A prominent Egyptian lawyer says he has gone so far to file a lawsuit against FIFA that “could exceed €1 billion, for the physical and psychological harm that Ramos gave Salah and the Egyptian people,” Goal reported.

“Ramos intentionally injured Mo Salah and should be punished about his actions,” Bassem Wahba said on TV station Sada El-Balad, according to Goal.

Any action from FIFA to affect Ramos’ ability to play for Spain this summer following an incident with his club would be unprecedented, though UEFA could examine if the play deserves further punishment for Real’s next European games.

Manchester United defender Eric Bailly was suspended for the UEFA Super Cup last summer after UEFA in July handed him a a three-match European ban following his actions in the second leg of the Europa league semifinal in May.

In 2014, Real Madrid’s Xabi Alonso was suspended for the UEFA Super Cup after joining in on the celebrations after the Champions League final, for which he was already banned.

#ThisisNigeria : Sale of codeine syrup thrives in Kano despite ban