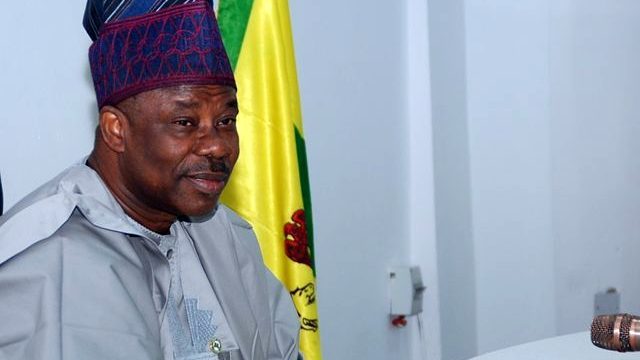 Investigations carried out by First Weekly Magazine has revealed that in line with his continued refusal to accept Dapo Abiodun as the official governorship candidate of the All Progressives Congress (APC) in Ogun State, there is grand plan by Governor Ibikunle Amosun to cause a great confusion and inflict optimum and irreparable damage to the party in the state, it’s national leadership and official candidates of the party in the state that is outside his  anointed cronies otherwise referred to as “Amosun’s consensus candidates list”.

There are early indications that Abdulkadir Adekunle Akinlade aka Tripple A, and other key members of Amosun’s kitchen cabinet, who lost out in the just concluded APC primaries may have finally concluded plans to contest elections under Democratic Peoples Party (DPP).

DPP is a Nigerian political party founded in 2006 by disgruntled members of the All Nigeria Peoples Party (ANPP).

Published names of parties’ candidates just released by INEC in Ifo Local Government Area and other selected areas showed names of several Amosun’s men believed to be holding the positions temporarily and in trust for most of Amosun “consensus candidates” who couldn’t win the nomination during the APC primaries.

It is in this regard that Governor Amosun, as widely reported recently by several online media, openly ridiculed President Muhammadu Buhari as a betrayal and ingrate, who abandoned him at critical time of need after he, Amosun had personally brought the President out of poverty by paying the President’s children’s school fees, and providing him with accommodation and doing some other things for him in the past.

We have also learnt very authoritatively that as part of Governor Amosun’s alleged destructive plans towards APC, he has secretly made funds available to each of his  preferred candidates and encouraged them to start all types of frivolous litigations against the candidates of the APC so as to ultimately drain them out financially before the 2019 general elections.

It was also gathered that Hon. Gbenga Ademosun, who is Governor Amosun’s current Commissioner for Community Development and Co-operatives and former publicity secretary of the APC in Ogun State, is the official senatorial candidate of APM and that this is another handiwork of the Governor.

Sources stated that Ademosun claimed to be a businessman on his INEC forms, which were made on oath.

We were informed that another classic case of Amosun’s alleged anti-party activity and “determination to destroy APC,” is having Kehinde Adepegba, who is the current Chairman of Ewekoro LCDA, as the candidate of another party among “other loyalists that he has planted in other political parties and ‘make things difficult for the candidates of the APC in the various political offices.”

It will be recalled that Governor Ibikunle Amosun had recently openly criticized the National Chairman of the party, Comrade Adams Oshiomohle, a chieftain of the party in the state and former state governor, Chief Olusegun Osoba, and those he called “Lagos cabal” as being responsible for his woes in Ogun State.

This was despite the fact that he reportedly became the state Governor in the first place with the backing and active support of the National Leader of the party, Asiwaju Bola Ahmed Tinubu.

A source, who didn’t want his name mentioned, told First Weekly that the true “ingrate” is Amosun himself, who allegedly got his initial breakthrough from the help of President Muhammadu Buhari as the Chairman of Petroleum Trust Fund (PTF), who he said awarded Amosun many lucrative contracts and retainership.

“It is pathetic for Amosun to have turned around and attempt to ridicule the President, who did everything possible to ensure that he got whatever he wanted from the Federal Government.

“How can Governor Amosun say he assisted Buhari.This is a man that was nobody before he got to the coveted office of a state governor in 2011. Now, he feels he is bigger than everybody and that Asiwaju Bola Tinubu should be disregarded. This is just too bad for someone like Amosun,” the source said.

The sources stressed that Amosun should have emulated Asiwaju Bola Ahmed Tinubu, who jettisoned his senatorial ambition in 2007 for Senator Ganiyu Olanrewaju Solomon aka GOS after he had been accused of imposing Mr. Babatunde Raji Fashola on the then Action Congress (AC) as the party’s governorship candidate for Lagos State.

Candidates allegedly planted in DPP by Amosun, who will eventually be substituted with names on his “consensus candidates” who did not succeed at APC primaries include:

Below are the list of APC party executive members/government political appointees that Governor Ibikunle Amosun planted in DPP to contest against APC. They are to be substituted with the “consensus” candidates on or before December 1st deadline for withdrawal/final substitution of candidates: