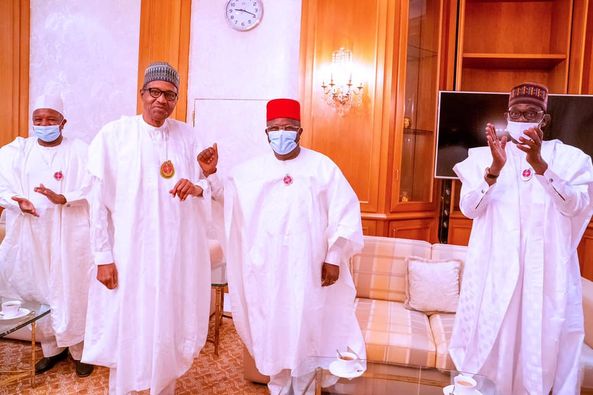 Governor David Umahi of Ebonyi State says he actually joined the All Progressives Congress (APC), on November 10, when speculations were rife that he was leaving the Peoples Democratic Party (PDP).

Umahi made the revelation on Thursday morning in Abakaliki during a reception for the Progressives Governors Forum signaling his official admission into the fold.

“My defection to APC was in obedience to God’s will, respect for President Muhammadu Buhari and an honour to dignitaries present as well as obedience to the wish of Ebonyi people.

“Money means everything to many people but I choose wisdom from God.

“People asked why I was leaving PDP, but I told them that if APC would treat me nicely when I don’t have any relationship with it, what will happen when I am in its fold?

“I told them that even as large as APC is, one man does not control the party but in PDP, one man controls the party,” he said.

Umahi advised that Nigerian politicians should try and get close to President Muhammadu Buhari to understand him, saying that the president never asked him to quit PDP.

“As the Chairman of the South East Governors Forum, I applied for N10 billion for the rehabilitation of the Akanu Ibiam International Airport, Enugu, the president obliged without conditions.

“The president never treated any governor with disdain and presently that I am in APC, there is no guarantee that I will be treated better than those already in the party as well as the PDP governors.

“We can boast of infrastructure and economic supports from the APC-led federal government, but we cannot do such for the PDP led administration since 1999,” he said.

Alhaji Mai Buni, APC National Caretaker Chairman, congratulated Umahi and his supporters for joining the party, saying that he was entitled to all rights and privileges due to progressives’ governors.

“You are automatically the leader of the party in the state and a waiver has been granted to you and your supporters across the 13 Local Government Areas (LGAs) of the state.

“You should try to be fair to all members of the party, you must realise that there were people already there before you,” he said.

He said that the APC caretaker committee has approved the dissolution of the state executive committee of the party.

“We will be inaugurating the state caretaker committee of the party which will ensure the formation of all structures at wards and LGA levels,” he said.

Governors at the event included those of Kebbi, Jigawa and Niger states.