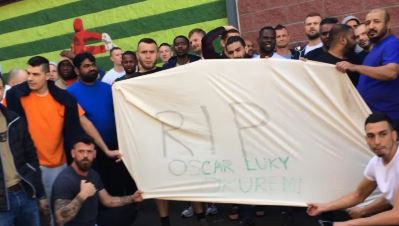 The British government has launched an investigation into the death of a Nigerian Oscar Okwurime at a detention centre next to Heathrow airport.

Okwurime died at Harmondsworth on Thursday, September 12 and the cause of death is not yet known. The Guardian quoted the Home Office as saying that the police, the coroner and the prisons and probation ombudsman were investigating.

Harmondsworth, together with its neighbour Colnbrook, is the biggest detention centre in Europe.  Friends on Okwurime’s wing said he had received a ticket for a charter flight to Nigeria due to take off next Tuesday. “He was terrified when he received the ticket and was so stressed about it,” said one detainee.

Others said tensions were running high at the centre and there was enormous distress about Okwurime’s death and apprehension about the impending charter flight. Detainees said they were particularly fearful about the possibility of being restrained on the flight. The Guardian has revealed that hundreds of people have been forcibly removed from the UK in restraints in 2018-19.

Detainees staged a protest about the death at 10am on Friday and passed photos of the demonstration to the Guardian. On a bedsheet used as a banner, detainees wrote “RIP Oscar Okwurime”.  “Oscar was a really nice guy,” said one detainee. Another, who also has a ticket for Tuesday’s charter flight, said: “Everyone is scared about being restrained by the guards.”

A third detainee, 24, who also has a ticket for Tuesday’s flight, said the Home Office had attempted to remove him on a flight last Friday. “Since that happened to me I’ve been having nightmares and panic attacks, particularly when I hear keys jangling,” he said.

A Home Office spokesperson said: “any death in detention is a tragic event and our thoughts and condolences are with the family and friends of Mr Okwurime. The welfare of all those in our care is of the utmost importance. All deaths in immigration detention are subject to investigation by the police, the coroner and the independent prisons and probation ombudsman.”