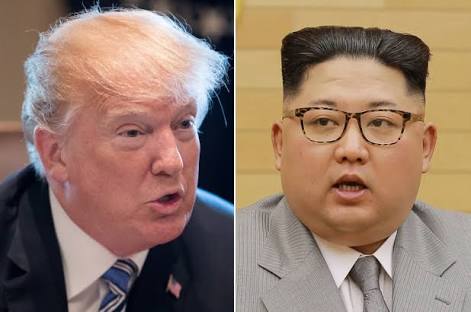 Russia and South Korea on Friday welcomed the announcement of a potential meeting between U.S. President Donald Trump and North Korean leader Kim Jong Un expected to take place by May.

Russian Foreign Minister Sergey Lavrov said the meeting is needed for the settlement of the nuclear crisis on the Korean Peninsula.

On Thursday, South Korean National Security Adviser Chung Eui-yong said at a White House briefing that Trump had agreed to meet with Kim by May to achieve permanent denuclearization.

“For sure, we believe that this is a step in the right direction. We have heard about this agreement only today. I hope that it will be implemented.

“It is needed to normalise the situation around the Korean Peninsula,’’ Lavrov said at a news conference in Ethiopian capital of Addis Ababa where he is with an official visit.

“It shouldn’t end up with a talk only.

“But pave the way to a comprehensive political dialogue aimed at the settlement of nuclear problem on the Korean Peninsula based on the principles approved at the six-party talks and in the UN Security Council,’’ Lavrov stressed.

Also, South Korean President Moon Jae-in, said: “the May meeting will be recorded as a historic milestone that realized peace on the Korean Peninsula …

“If President Trump and Chairman Kim meet following an inter-Korean summit, complete denuclearisation of the Korean Peninsula will be put on the right track in earnest,” Moon said, as quoted by his spokesman, according to the Yonhap news agency.

Tensions on the Korean Peninsula escalated drastically in 2017 due to the North’s nuclear activity, which led to the UN Security Council imposing its toughest ever sanctions on the country.

In November, North Korea tested its most advanced intercontinental ballistic missile, which according to Pyongyang, would have been capable of hitting any part of the U.S. mainland.

The announcement of a meeting between the U.S. and North Korean leaders comes after months of contentious exchanges.