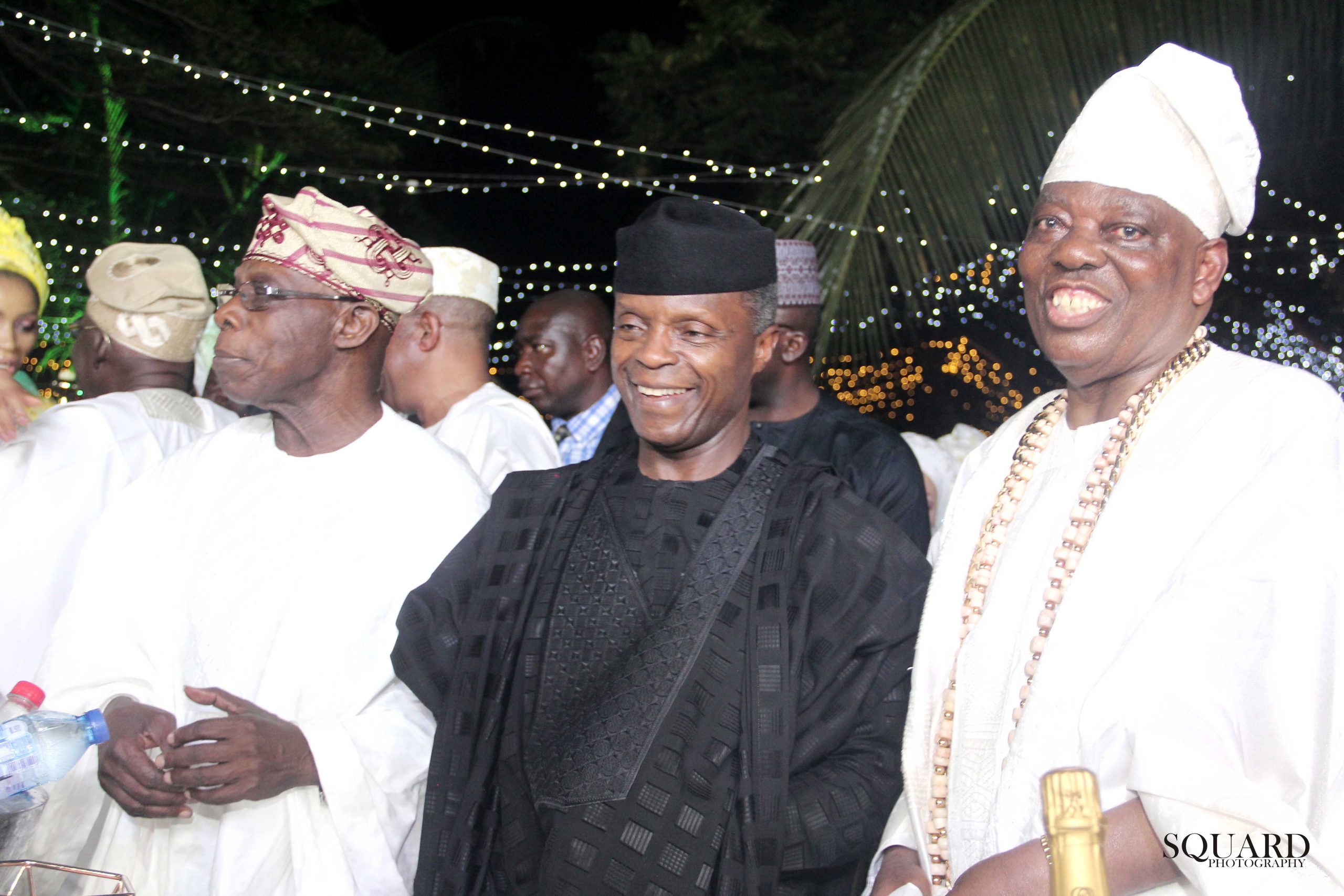 Those who witnessed the 80th birthday celebration of renowned industrialist and business mogul, Aare Rasaq Okoya at his panache Oluwanishola Estate will readily agreed that it was the first-class party, which will remain unforgettable in memories of those that attended the first-class party for a very long time.

The highlight of the event was the cutting of birthday cake by the celebrant flanked by Vice President Prof. Yemi Osinbajo, Former President Olusegun Obasanjo and former Governor of Lagos, Asiwaju Bola Tinubu among others.

The vice president, who presided over the cutting of the cake, prayed to God to grant Okoya 100 years, preserve him and keep him in good health.

For a man who started from a very humble and poor beginning, eking out a living from petty trading, to rise to the topmost echelon as an industrial giant, it should not surprise anyone that his 80th has been celebrated amidst pomp and the ceremony, starting with a thanksgiving prayer with him and close members of the illustrious Okoya family, led by prominent Islamic clerics.

The build-up of the much-awaited history-making birthday celebrations of business mogul, Alhaji Rasak Akanni Okoya clustered with the A-list guests as the ambiance is engrossed in anticipation of what to come. The guests were thrilled by renditions from different musicians, as the vice president and former President Olusegun Obasanjo stepped out with the birthday boy; Okoya on the dance floor.

As expected his circle of equally stupendously rich friends and associates were all gathered in his massive estate to celebrate the milestone age with him, likes of notable Nigerians that attended the event were the royal father of the day, Ooni Of Ife, Oba Adeyeye Enitan Ogunwusi, Lagos state governor, Babajide Sanwo-Olu, Minister of Information and Culture, Lai Mohammed, former Commonwealth Secretary-General, Chief Emeka Anyaoku, businessman, Aliko Dangote as well as traditional rulers.

While his youngest wife, elegant and charming Sade Okoya, was on her toes making sure that the commemorative birthday party was the talk of the town as she has put all necessary logistics like maximum security, sumptuous dishes, vintage drinks, good music and sundry merriments in place which made the day a memorable one.

Beejay Sax performed to the entertainment of the special guests and the big stage was shared by two major compares in the MC industry, Gbenga Adeyinka the 1st and Tee-A, while The 1st Mayegun Of Yoruba Land, K1 De’ Ultimate, Ebenezer Obey, King Sunny Ade, Arunna Ishola, Sir Shina Peters, Davido and others trilled the guests to an unforgettable and unlimited funfair which made the birthday a carnival alike celebration.

Buhari: Terrorists will pay a heavy price for killing CAN chairman