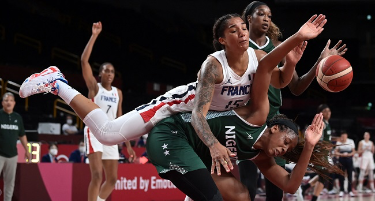 The Nigerian female basketball team, D’Tigeress, suffered a second straight defeat at the Tokyo 2020 Olympics on Friday. The Afrobasket women champions were routed 87-62 by the French side.

Gabby Williams, Endene Miyem, Marine Johannes, and Alix Duchet each added 13 points as five players scored in double figures for France. Nigeria had an impressive showing in the opening round of the tournament despite losing to the U.S by nine points.

D’Tigeress was also attempting to break a basketball jinx and become the first African nation to win an Olympic contest in women’s basketball since 2004. France made an impressive show of dominance in the first quarter by going six points up and further leading by three in the second quarter.

Les Bleues closed the half with a 22-8 scoreline and made it a 44-27 halftime advantage with Williams adding six points and Duchet adding five points.