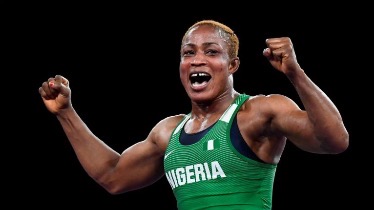 She had guaranteed Nigeria a medal on Monday after beating Mongolia’s Battsetseg Soronzonbold to reach the final.

Although she lost the final to USA’s Stock Mensah Tamyra Marianna, the 32-year-old can be proud of her achievement after earning Nigeria’s second medal at the Tokyo games.

Earlier in the day, Ese Brume had made the country proud by winning bronze in long jump.

She won the bronze medal in the women’s middleweight at the 2014 Commonwealth Games. She beat Chloe Spiteri in her bronze medal match.

She also competed in the women’s middleweight at the 2016 Olympics, losing to Soronzonboldyn Battsetseg in the second round. She won a gold medal for women 63 kg category at the 2017 Islamic Solidarity Games