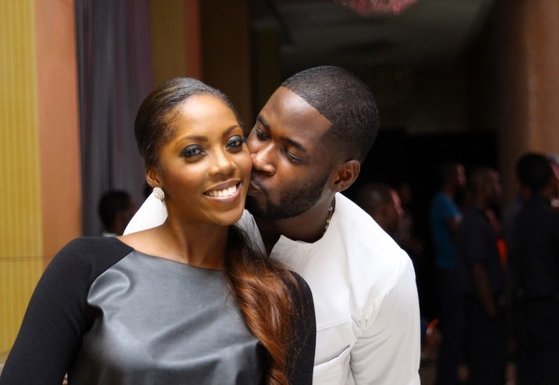 Basketmouth, stand-up comic, believes Tiwa Savage, Mavin Records singer and Tee Billz, her estranged husband, did immense damage to their marriage as a result of their public revelations.

The couple’s marriage hit the rocks after Tee Billz took to social media to accuse his wife of being a serial adulterer and reportedly tried to commit suicide.

Savage responded by holding a no holds barred interview, where she made startling allegations about her husband.

Speaking on The Gist, a chat show which syndicates on Hip TV, Basketmouth on Saturday affirmed that the couple as well as many others tend to divulge too much personal information on the internet.

“To a large extent, I think there are a lot of people abusing the use of social media, I am sorry. Most of us artistes realizing that we have I, 2, 3 or 4 million people following us and you know that when you say something, a lot of people are going to react.

“It is like drug; you can’t contain yourself and start saying some crap. You are like a god having a lot of followers, whatever you tell them to do, they do.

“I am okay with people who go on social media to rant but I am against those who have turned it into a church to settle family issues. Normally, if you have a marital problem, you call your wife one on one. If you cannot contain it, you call in the parents. That’s how I saw it when I was growing up which is the culture I have embraced.

“That kind of situation shouldn’t be taken to social media and let people who have never been married, have no idea about what marriage is all about, say stuff about your marriage.”

“There are a lot of people with mental problem who have phone and data, you then give them the access to talk trash about your personal life.

“In Teebillz situation, the way he spoke on social media really appeared as though he was going to commit suicide and said horrible things to his father.

“Those words were words you say and just die, but now that he is still alive, how would he face his father? It would have been better if he had just written a letter to the man instead of putting it online. Unfortunately again, he went to blast his wife and his wife’s mother. These are things that shouldn’t be put online.

“Another thing is that Tiwa has a larger following than Teebillz, after Tiwa blasted him, it was extreme and it crushed him. He had no comeback; there is no comeback to things like that.”

The comedian admitted that he has also come close to losing his cool on social media over a matter that involved Davido, Afro-pop singer.

While making it clear that he’s not one to shy away from saying his mind, Basketmouth stressed that he would rather do it face to face than behind the mask of the internet.

“I do not get on social media walls because I want to increase following, mine is, if you come at me, if I feel the need to address you, I will. But 99% of the time, I would not say anything about it.

“There are so many times that I allow issues to slide, for instance, I said a joke that happened to be out of context about Davido; Davido was really upset. He didn’t come at me but I was a little bit shaded with what he said. I wanted to react but instead, I apologised.

“Personally for me, war should be war, come and say whatever you want to say to my face. It is wise for you not to bring out your personal issues on social media and that’s what I stand for.

“If it is a clap back at an artiste like yourself, then it is your choice. Once it gets to family, let those ones be in your house, let your Instagram and twitter group be between you, her father, her mother and herself.”