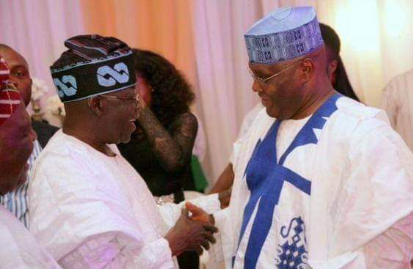 National leader of the All Progressives Congress (APC), Asiwaju Bola Tinubu has broken his silence on purported meeting with former Vice President, Atiku Abubakar at the Abuja Airport.

A viral video in circulation suggested that Tinubu went to welcome Atiku at the airport to show his support for him ahead 2023 presidential election.

Social media have feasted on the report, twisting it to suit their whims and caprice.

But Tinubu’s spokesman, Tunde Rahman, said the meeting between his boss and Atiku was a chanced meeting.

He said Atiku had arrived first at the airport and was in his car about to leave when Asiwaju arrived.

Rahman said as APC National leader was informed about Atiku’s presence, he walked up to meet him.

In his words: “On the Asiwaju Tinubu-Atiku Video at Abuja Airport-It was a chanced meeting at the airport in Abuja. Former Vice President Atiku had arrived first and was in his car about to leave when AsiwajuTinubu arrived.

“As he was informed about him, Asiwaju Tinubu walked up to Atiku”

If you want another war, Nigerian Govt will have no choice – Senator Bulkachuwa warns Southeast