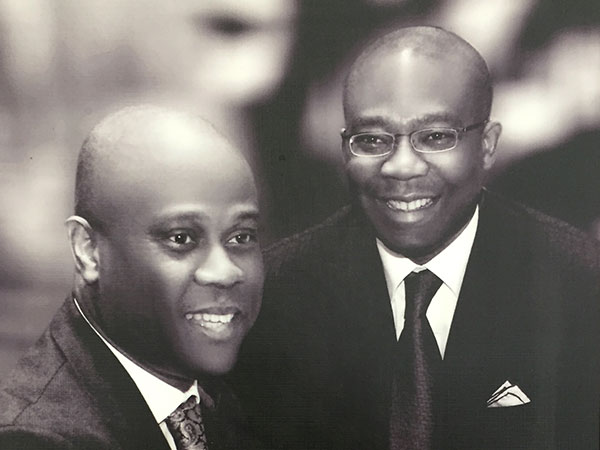 Aigboje Aig-Imoukhuede, co-founder of Access Bank Plc, has disclosed a rare insight into how himself and partner, Herbert Wigwe bought and transformed Access Bank Plc through the capital market.

Speaking in a chat with Oscar Onyema, the session moderator and CEO, Nigerian Stock Exchange, Aig-Imhokuede said prior to the takeover of the old Access Bank, the financial institution was a very small bank and had been listed on the NSE.

“It was a small bank listed on the Nigerian Stock Exchange but wasn’t being run well. They tried to raise capital, and the markets were not responding very positively to its attempt to raise capital,” the former bank CEO said.

He then narrates how they make the move to actualize the takeover of the bank from the old owners.

“That was the opportunity for myself and Herbert Wigwe, whom I had convinced crazily that we should leave Guaranty Trust Bank and buy Access Bank. It took $10 million to buy 51 per cent of Access Bank. Between Herbert and I, we had $2 million. We understood the markets, and we were able to fund a group that basically raised $10 million, and then we bought Access Bank.

“Without Access Bank being listed, this story would never have happened. It would have been much difficult,” he added.

Speaking further, Aig-Imoukhuede noted that after the acquisition, he set the audacious goal of making Access Bank being among the top ten banks in Nigeria.

“In 2002, we bought into Access Bank, and the first thing I learned was that the dollar balance sheet of Access Bank was a bit smaller than Aliko Dangote’s credit card limit. I thought to myself, after GTBank, what had I gotten myself into.”

He continued, “In the market then, Access Bank was 80 out of 90 banks. We came to the stock exchange and said that in five years’ time, Access Bank would be among the top 10 banks. The market didn’t laugh. The investors didn’t laugh. They looked at these highly driven young men and women and said, let’s give them a chance. Five years later, we were number 8.”

After meeting the top 10 target set, Aig-Imokhuede’s team set an even bigger goal of becoming one of the top 5 banks in Nigeria.

“We then said in five years’ time, we would be in the top five. Moving from 80 to 8, was a bit easier than from 8 to top 5, because the institutions around were very formidable. That in itself, also concretised the need for us to grow regional,” he confessed while claiming that Access Bank is currently in the third or fourth position in Nigeria, depending on what metric used.

Aig-Imoukhuede also hinted that there’s a major deal in the works and gave advice to entrepreneurs interested in rolling out across Africa.

The successful banker who in his post–Access Bank career founded Coronation Capital, stated that basic needs were yet to be met in Africa.

“If you look at the African opportunity, it’s about meeting basic needs, because basic needs are largely unprovided for, and provide solutions to those basic needs at scale. Think about Aliko and cement,” he said.

In his view, African financial providers had played a lot on the short end of financial solutions. Money transfer, credit cards, but the need around safety, security and wealth creation is completely unmet today, apart from in South Africa.

He then gave a brief into why he founded the Coronation Capital after he left Access Bank.

“So Coronation Capital is essentially a private equity platform that has grown into a much larger diversified investment management platform. We want to, as we did with Access Bank, establish very firmly in Nigeria and then grow regional.”

“I’m giving you a sneak preview into a major announcement you are going to hear in January, but I think a lot of money is going to be made in that space. The stock exchange for the Coronation Investment platform is a tool that we are going to be providing to the market. So there’s a lot going to happen,” he added.

Aig-Imokhuede said the move would have taken place prior to this time, but for his serving as the President of the NSE.

His words; “My being President of the Exchange held me down, because I couldn’t do things that would put me in conflict in my role. So as I disengage, I would be able to unleash my creativity in the capital markets for wealth creation.”

Aig-Imoukhuede also gave a glimpse into his interest in philanthropic efforts.

“The one thing I have found across African countries is that it was too often the exception, that the public service in Africa, was an enabler of dreams. In Africa, too often policymakers and policy implementers were disablers of dreams. And I said, why? Why should I almost have to die to make my business work? Why should I as a barber in Obalende, in addition to learning how to cut hair, why do I have to learn how to be a power generator to run a shop?”

“I then did a study, and I found that over several years from the mid-70s, Africa suffered a massive under-investment in capacity development of the public sector, while there was a shift of massive investments to the private sector.”

“We cannot afford to live in Africa, with this under-investment in capacity in the public sector; we will all suffer for it. So, AIG (Africa Institute of Governance) is all about building capacity in the public sector. So, the first thing we did was scholarships to Oxford University Blavantik School of Government, to study for a Masters in Public Policy (MPP), on the condition that you must come back and work for your home country. Next, was a fellowship programs for public servants who have excelled.”

Aig-Imoukhuede also disclosed that the organisation was working on a world-class finishing school that will be as good as JFK and BSG in Africa and for Africans.

In addition, AIG was working with the civil service in Nigeria around reform.

“The first thing is this: clearly an exchange in Africa will have to walk the same path as exchanges across the world to make themselves fit for purpose. If you are mutual, you have to demutualise.”

According to him, this would enable the exchanges to be more entrepreneurial in thinking while adopting technology would also help exchanges be more useful.

“In addition, technology can also play a big role. I think that with the very many options around, from blockchain to distributed ledger technology, to simply digital systems for distributing retail products, the ability to leapfrog and serve retail markets is enormous.”

ASUU Strike: Lecturers walk out of meeting with govt delegation