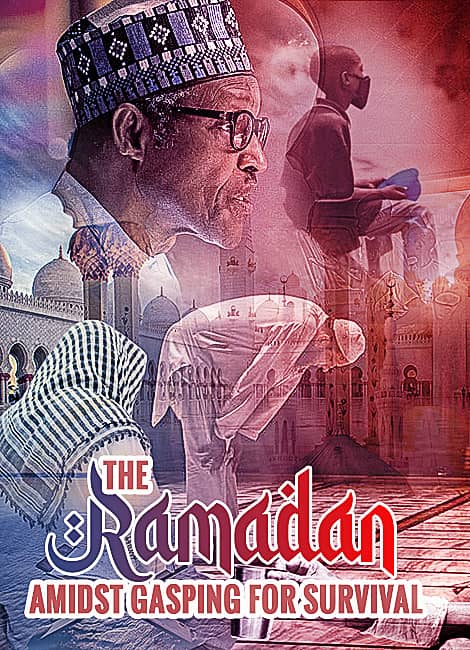 The Undiluted glory is to God, whom by his will our lives were spared to witness another sacred month of Ramadan.
The month embedded with “Night of Bliss – Laylatul Qadri, which is worth than a thousand months, stocked with bounties for pious Muslims, who relentlessly crave for it.

Also gratefully indeed for averting home confinement, ordinarily known as lock-down which was experienced last year as part of the measures taken to flatten the curve of the COVID-19 pandemic.

But in this year, fears attached to the pandemic, seemingly subsided in this month, re-paving the way for poverty – the widely known grand tormentor to Nigerians well-being, which is still lurking around the corner.

The Gasping for survival to make the ends meet has become the order of the day, whereby every Muslim populace in this holy month is expected to change his lifestyle, through doubling of worshipping and supplication and also renewing supply of consumables and other juicy drinks to the family to quench the thirst endured during the day-long fasting.

But this has become nostalgic, not realistic for the impoverished to enjoy such feasting in Nigeria today due to economic depression, retrogression, or whatever names the technocrats on the power corridor calls it.

Life is continuously becoming hard and pricey to the common man
for having a sleepless night due to over-thinking how to turn the imaginary foods to the family table into reality.

High unemployment, youth restiveness, and hyperinflation of food prices and other consumables were on the rise, due to government laxity to check the anomaly.

While gruesome attitudes of some opportunistic and ungodly traders are parts and parcel of the problem, by using the period, mindlessly to amass wealth by hook or crook to the detriment of the poor and impoverished, through unjustifiable price increments.

Unfortunately, the trends keep on going, despite calls being repeatedly preached by clerics who weren’t heeded.
This endless hardship composed a mental picture to many, that Nigeria is only worth living for the rich and mighty, shackles of misery for poor and less privileged.

Even though in every generality there must be exceptions, there are some God-fearing wealthy and well-meaning individuals who by the virtue of their hard-earned fortune and other means available at their disposal, were not relenting towards assisting by helping the poor and the neediest particularly in this holy month of Ramadan.

Ramadan is a sacred month where Muslims are expected to engage in character formation, purity of minds, soul and body renewal, and re-instilling God-fearing. This is a golden opportunity that millions haven’t witnessed, and the living ones at the moment we’re lucky to see, which deserve to be seized and not relent to pass by.

In the light of this, there’s ample need for every Muslims to use this holy period towards seeking forgiveness from the supreme deity, to offer succor amid the current insecurities and economic hardship which compelled the majority of citizenry gasping for survival in Nigeria – the country blessed with resources in abundance.

Kano’s Traders Summit: Too many hurdles to cross