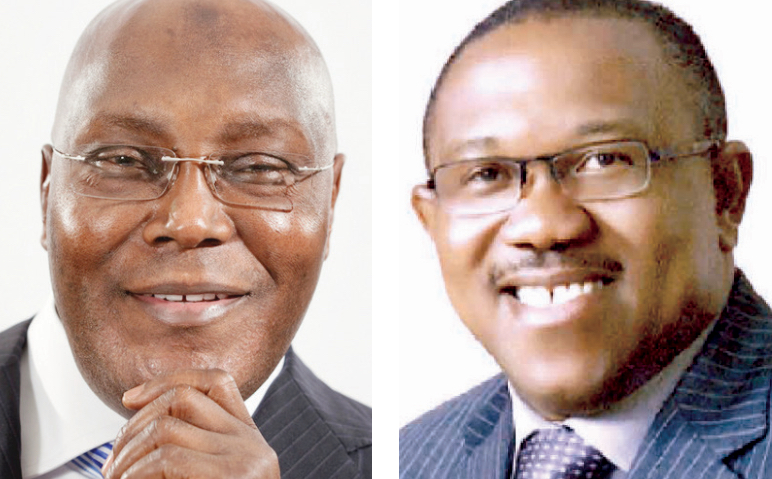 Nigerians watched with shock and dismay the barefaced lies and outright dishonest claims of the Presidential and Vice Presidential Candidates of the Peoples Democratic Party (PDP), Alhaji Atiku Abubakar and Peter Obi in the television show tagged ‘The Candidates’.

Let us tell Nigerians some of the lies they told in that programme, which some simple fact-checks would easily expose.

Alhaji Atiku Abubakar claimed that at handover in May 2015, our GDP growth rate was 6%.

Fact Checked Truth: With a consistent and rapid drop of our GDP, their Coordinating Minister of the Economy at that time, Okonjo Iweala, former Central Bank Governor Prof. Charles Soludo and the Central Bank Governor at the time, now Emir of Kano, Sanusi Lamido Sanusi, warned the PDP Government and Nigerians that we were headed for a recession.

Alhaji Atiku Abubakar claimed that security challenges were restricted to the North East during their time.

Truth: Nigerians will recall that the Boko Haram activities had spread all over the North East, North West and North Central. For instance, the UN Headquarters, Police Headquarters, a Bus stop in Nyanya, a prominent Plaza in Wuse II were all bombed during the era of the last govt. A church or Mosque was bombed every week in 2013/2014. The herders-farmers’ clashes were the deadliest in 2014, claiming over 1,300 lives in a short period across the North. Boko Haram occupied over 17 Local Government Areas and hoisted their flags, effectively establishing a caliphate in the North East. All these happened before the coming of this administration.

Peter Obi claimed that out-of-school children grew to 13.5 million under this administration .

Truth: The figure of 13.2 million out-of-school children was a 2015 survey by UNICEF. An alarm was raised by several global bodies then because the figure had grown from 10.5 million in 2010 to 13.2 million in 2015, despite record earnings of the Government at that time. In other words, Peter Obi’s claim is self-indicting.

That Alhaji Atiku Abubakar, as a Customs officer, said there was nothing wrong at that time with setting up a company that had dealings in the Ports that were under Customs’ supervision.

Truth: The Code of Conduct for Public Officers was first enshrined in the 1979 Constitution of the Federal Republic of Nigeria. Atiku Abubakar co-founded the company, as a serving Customs officer, three years after the 1979 Constitution came into operation. According to Section 1 of the 5th Schedule to the 1979 Constitution, a public officer shall not put himself in a position where his personal interest conflicts with his duties and responsibilities. By establishing a company involved in Port-related business at a time when he was an officer in the Nigeria Customs Service charged with managing the Ports, Alhaji Atiku Abubakar definitely put himself in a position where his personal (business) interest conflicted with his duties as a public officer.

Truth: Despite high oil revenue, according to the World Bank, extreme poverty under PDP grew to 112 million in 2013 through 2014, compared to 86 million today. India pulled their citizens out of poverty for over two decades by using the same methods Nigeria is now using today.

In summary one would have thought that in the course of the programme, ‘The Candidates’, Atiku/Obi would have modified the lies they told earlier in their campaigns and make it consistent with reality as most of them were already fact-checked by independent bodies and proven to be lies. Alas they have continued on the same path, believing that ‘If you tell a big enough lie and tell it frequently enough, it will be believed’.

The Summary of their Presentations:

First and foremost, Nigerians should take note that Alhaji Atiku Abubakar defined Corruption as “the use of your privileged position to either enrich yourself or enrich your relatives or even your friends”. When this is juxtaposed with his earlier statement in Lagos, that he will enrich his friends if he becomes President, we can safely conclude that he will be fully in the business of corruption if he becomes President.

Secondly, Atiku/Obi made it clear to Nigerians that conflict of interests as a public servant should be the norm as, during their tenures, they found absolutely nothing wrong then and today, with investing public funds in enterprises they own or their families own. For instance, Kadaria ran Peter Obi into a ditch when she asked him if his family was not enriched as a result of using public funds for his family business ‘NEXT’.

Thirdly, their claim on experience in running anything public or private cannot stand any act of scrutiny. The Presidential candidate, who is easily a major contributor to our huge unemployment problem today as a result of his corrupt privatisation programme, counts this failure as a huge experience and wants to repeat same if elected.

Finally, their proposed Agriculture Programme which they claim to have put together to lift majority of the people out of poverty is a version of what is already being implemented by the present government under the Anchors Borrowers Programme and the Government Enterprises and Empowerment Programmes.

After watching Atiku/Obi on that programme, it has become clear to all Nigerians that our public institutions and commonwealth would be in grave danger if left in the hands of these dodgy and questionable characters who have no morals and no scruples about using and misusing public funds for private gains.