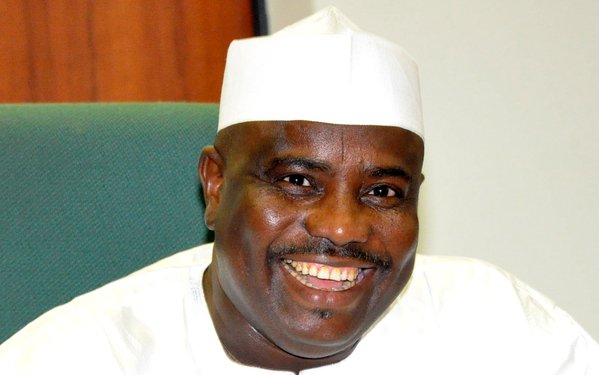 The race for presidency of the 9th senate, to be inaugurated in June, has already started. The All Progressives Congress (APC) has secured 60 of the 95 seats announced so far, with the winners of the 14 remaining seats still being awaited.

The top contender for that position of senate president has to be Ahmad Lawan, senator representing Yobe north senatorial district.

He was believed to have been favoured for the position by President Muhammadu Buhari in 2015.

Lawan was re-elected by his constituents on Saturday and is one of the ranking APC senators.

Four years ago, the APC caucus in the senate was divided over the leadership of the national assembly. In an attempt to broker peace between the two APC factions, the president had summoned an emergency meeting at the International Conference Centre (ICC). While Lawan and his supporters were there, Bukoal Saraki teamed up with the PDP to become the nation’s No. 3 citizen.

In the end, Lawan was compensated with the position of senate majority leader.

HE REMAINED LOYAL TO THE APC NONTHELESS

Despite his hopes getting shattered, Lawan stayed with the APC even when the party was hit with wave of defections. On one occasion, APC lost 14 senators with Saraki announcing his exit shortly after.

Amid the defection storm, Lawan remained there to lead his colleagues and defend the APC. He defended the president for not signing the electoral act amendment bill and opposed those who contemplated  impeaching the president.

ONE OF THE LONGEST SERVING LEGISLATORS

Lawan has been a member of the national assembly since the return of democracy in 1999, together with David Mark and Nicholas Mutu.

He was first elected a member of the house of representatives in where he chaired the committees on education and agriculture at different times. After eight years in the lower legislative chamber, Lawan took a shot at the senate in 2007 and was elected to represent Yobe north district, a position he has held ever since.

He is unarguably one of the most experienced APC lawmaker returning to the 9th senate, having been at the two chambers.

The 60-year-old is a graduate of the University of Maiduguri where he read geography. He also has a postgraduate diploma in land survey, an MSc and PhD in Remote Sensing and Geographic Information System (GIS), all from the University of Cranfield, United Kingdom.

TINUBU’S ADMIRATION FOR HIM

At a recent meeting of some APC leaders in Ibadan, Oyo state, Bola Tinubu, a national leader of the APC, spoke glowingly of Lawan. He defended the party’s choice of him as senate president in 2015, praising his continued loyalty to the party.

“Senator Lawan … you are a great example of a very consistent and intellectually resourceful leader that we have in this country,” he said.

“We saw in him, these leadership traits and the qualities we wanted in the Senate President. We know you are qualified and competent to be, that you would have led the most important arm of our government more effectively but the political prostitutes and their robbers and their collaborators denied you of it because of selfishness and selfish aggrandisement.

Shortly after he won reelection bid, the senator the APC is not only confident of producing the next senate president but that such senate leadership will mend the broken ties between the legislature and the executive.

“This time, it will not be the kind of National Assembly that will betray the trust of Nigerians; the national assembly will support Mr President to meet the needs of Nigerians,” he had said.

“The time for unnecessary bickering and opposition has come to an end; we cannot afford to waste more time on unnecessary politics and denying the people of Nigeria the much needed development. The national assembly will support and cooperate with the president to effectively serve the interest of Nigerians.”

Sounds like he already has his plans all figured out and just waiting for the big moment.

Apart from Lawan, there are other ranking senators who could become senate president if the position is zoned to the north-east or north-central.

Adamu, a former governor of Nasarawa state who will be serving his third time in the senate, is a possible candidate for the job. The senator was once accused of plotting the removal of Saraki but he later denied this, describing Saraki as his son. He represents Nasarawa west senatorial district.

Ndume who represents Borno south senatorial district is also another possible contender. He is also returning to the upper legislative chamber for a third term. He was made the senate leader along the line but was later removed in January 2007.

A two-time governor of Gombe state, Goje has been representing Gombe central in the senate since 2011. He is arguably one of the most vocal lawmakers in the senate and is in the mentions as possibly the next senate president. He currently chairs the senate committee on appropriation.

Oshiomhole: Atiku not destined to be president