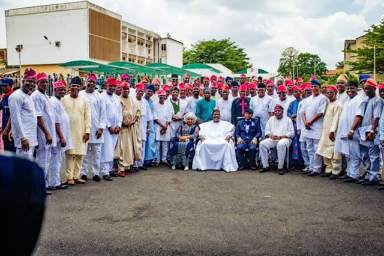 Supreme Court of Nigeria has overruled the sacking of erstwhile Oyo State Council Chairmen and Councillors by Engr Seyi Makinde and its judgement asked the Governor to pay their 28 months’ salaries and cost of 20M against the OYSG over illegal removal of the council executive and legislative arms.

After close to two years moving from the High Court to the Appeal Court, the Supreme Court Friday morning laid to rest the issue of the sacking of council chairmen and councilors by Seyi Makinde, Governor of Oyo State.

The apex court said that Makinde was wrong to have removed the council Chairmen and Councillors.

Though details of the judgement are still sketchy as at press time, it was understood that the council chairmen and councilors had been sacked few hours after Makinde took oath of office as governor.

They had been elected by the administration of late former governor Abiola Ajimobi.

Rather than ask them to return to their respective council areas, the court asked Makinde to pay all the council chairmen and councillors their salaries and allowances before August 2021.

With the judgement, the council election fixed for May 22, 2021, can now go ahead.

The major opposition party, APC, whose members went to court to challenge their sacking, would, however, not be participating in the forthcoming Local Government Election.