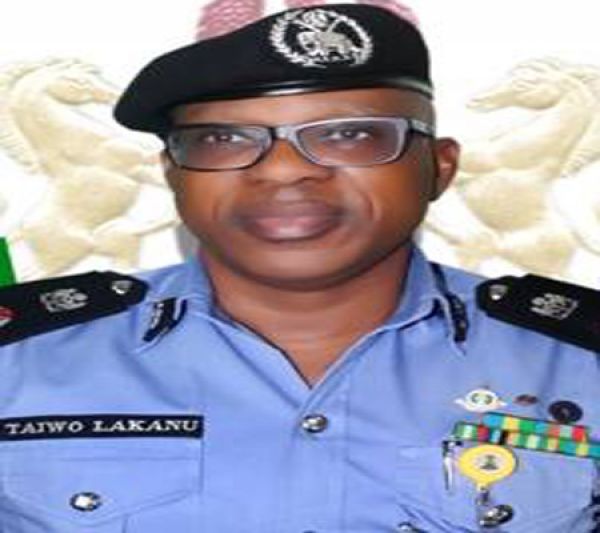 It was fun galore recently as Nigeria’s top police officer, DIG Taiwo Lakanu, who recently retired from the police force after 33 years of meritorious service, celebrated his 60th birthday.

The Akogun of Lagos was full of smiles as he was obviously grateful to his beloved family and friends as he savoured the joy of the special day.

Friends and family members of the Lakanus trooped out on this special day to honour an exemplary police officer with felicitations.

They were all happy to celebrate with this man of integrity and patriotic public officer at the prestigious Red Carpet Hall, Oniru, Victoria Island, Lagos –and no one could dispute the fact that this accomplished police officer deserved such honour.

The reason is not farfetched; Akogun Lakanu carved a niche in the public and social spaces, a super cop with enviable achievements.

His place in the comity of Nigeria’s most successful policemen is undoubtedly assured by the impact of his performances.

As he joined the retirees, the gracious policeman enjoyed the unquantifiable love and goodwill of friends, family and business associates.

So as this man of means and character clocked 60, his wife and children, threw a big bash for him.

It was an expensive event with the creme of Nigeria’s high society in attendance.

There were enough food and expensive drinks to go round as the celebrant evinced joy and gladness at the colourful ceremony.

It was a great party and an undeniable testament to the celebrant’s worth as a true man of the people and a public officer with untainted records.

Politicians exchanged pleasantries with industrialists, top bankers embraced top celebrities, former governors and incumbent governors laughed together, and everyone wore a happy smile as they ate and drank to their satisfaction at the lavish event.

All through the party that was filled with fun, and good music, Lakanu wore a permanent smile as he intermittently discussed with guests, while having a good time.

Every guest was given a royal treatment as they were all treated to the choicest brands of champagne; from Ace of spade, Don-Perignon, Crystal and Cognac to Moet & Chandon.

Apart from the assorted liquor, beer and fruit juices, the guests were also treated to delicious finger foods and dessert that sufficiently wet their palates and sated them.

At the background, a soulful medley of very old and contemporary music wafted from well-appointed woofers causing the guests to sway, shuffle and waltz as much as the music moved them and transported them to euphoric cusps.

However, the centre of attraction that night was no other person than the beautiful wife of the celebrant, Omowunmi who attracted the attention of everyone at the event with her infectious charisma as she serenaded her husband with beautiful love songs.

Those, who know her well never got tired of paying tributes to her over her humility, and for being a good wife indeed.

In appreciation, Lakanu beamed with smiles and heartily hobnobbed with dignitaries and friends at his star-studded birthday.

And despite being loved and treasured by anyone, Akogun succeeded in turning generosity, excellence and humaneness into an art form.

The event proved that it pays to undertake one’s assignment with a reality that there would be a day of reckoning or an occasion to recall the person’s performances.

For the records, Taiwo Lakanu was born on October 12, 1959, in Lagos Island, Lagos State.

He attended several courses within and outside the country, including Crime Investigation Course at the Police Staff College, Jos, and Developmental Course at Kofi Annan Centre for Peace Keeping, Accra, Ghana. He is also a fellow of National Defence College, Abuja.Furthermore, before his recent elevation as DIG, Lakanu had served in various capacities in the service as AIG Federal Operations, Force Headquarters, Abuja; Commissioner of Police in Imo and Ekiti States; Commissioner of Police Airport Command, Lagos; Principal Staff Officer to the IG (Force Headquarters Annex, Lagos), among others.

He was also the Assistant Inspector General of Police in charge of Zone 7 Headquarters, Abuja, comprising the Federal Capital Territory (FCT), Niger and Kaduna States.A celebrated crime fighter, Lakanu, who is also the Akogun of Lagos State and the Onwa Na Etiri Oha (the moon that shines) and Agu-na-echemba (the lion that guides the town) of Imo State was once described by his host governor in Imo, Chief Rochas Okorocha, as the long-awaited divine messenger sent by providence to rid the state of criminals.It was also learnt that wherever he finds himself, Lakanu has done his best to restore the lost glory of the police.

From the time he enlisted as a Cadet Assistant Superintendent of Police (ASP) in 1986, he has risen through the ranks, holding positions in operations, investigations and administration. Lakanu was a leading member of the Special Anti-Robbery Squad (SARS) that ended the reign of the dreaded bandit, Shina Rambo in the 80s. He served as a Personal Staff Officer (PSO) to an Inspector General of Police. He was recently celebrated at an award ceremony organised by Security Watch Africa in Houston, Texas, USA. He was named as the Most Outstanding Crime Fighter in West and Sub-Saharan Africa. Lakanu is loved by the people as well as Journalists.

His accomplishments in the Nigeria Police Force are unrivalled and these gave him popularity all over the nation.

Some of these include; leading Special Forces to Kaduna where he quelled the crisis, which earned him commendation from the governor, Malam el Rufai, who praised his leadership qualities and operational experience.

This man of integrity and action was in Ekiti and survived the holocaust there.

In Imo State, he excelled and the high point of it was the supervision of the killing of the most notorious kidnapper in the South-east and beyond, Vampire.

This singular act led to his being nicknamed as the “messiah” and he was bestowed with two chieftaincy titles as “Onwa natili oha of Igboland” and “Agu-na-echemba” of Imo State.

Today, DIG Taiwo Lakanu (rtd.) stands talk among his contemporaries as an achiever and a good example that the Nigeria Police Force is not as bad as some people have painted it after all.