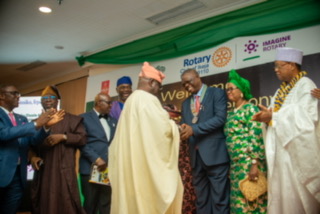 Rotarian Sola Akinsiku has been installed as the 55th President of Rotary Club of Ikeja.

The colourful investiture which also witnessed the induction of the new board of Directors for the 2022/2023 Rotary year held at the Lagos Sheraton hotel Ikeja last Sunday July 10, 2022.

The event also afforded the Club the opportunity of presenting awards to deserving personalities.

The Governor of Ondo State, His Excellency, Arakunrin Oluwarotumi Odunayo Akeredolu, (SAN) who was represented by his Deputy, Hon. Lucky Orimisan Aiyedatiwa was awarded Peace Ambassador.

Also, Advertising Guru, Dr. Abiodun Olusina Shobanjo was conferred with a Special Recognition Award for Commitment to Humanitarian Services while the father of the day and also a Past President of the Club, Past Assistant Governor, (Chief) Olabintan Famutimi as well as the Guest Speaker, pioneer Managing Director of Seplat PLC and now Founder and Chairman of AA Holdings, Austin Avuru also received Special Recognition Awards for Commitment to Humanitarian Services.

The guest speaker spoke passionately about the relevance of the Rotary Club in the face of today’s socioeconomic realities where the real economy and the secondary economy, influenced by criminal activities are both in operation, with the latter pulling many, especially youths, making the work of Rotary increasingly important.

Speaking on how he felt about the day, the new President expressed his joy that the day finally came after much preparation, giving thanks to God.

He described Rotary as a platform through which public spirited individuals come together to serve humanity, being the helper of the helpless, giving hope to the hopeless and meeting the needs of the needy.

According to Akinsiku, ‘’A number of projects that are designed to make positive impact on well-defined targets would be executed by Rotary Club of Ikeja within the 2022-2023 Rotary Year. Such included building and donating blocks of Classrooms to some secondary schools within Ikeja community.

Born in 1958 in the prominent Erinketa Quarters of the Ondo Kingdom to Mr. Adeniyi Moses Akinsiku and Mrs. Mogbonjubola Beatrice Akinsiku, Akinsiku, a fellow of the registered practitioners in adverting in Nigeria had both elementary and secondary education in Ondo and then proceeded to Saint Peter’s Teachers’ College Akure where he obtained Grade II Teacher’s Certification. He also attended the Adeyemi College of Education, Ondo, for the National Certificate in Education (NCE) and later obtained his first degree in English Language (with Education) from the University Ife (now, Obafemi Awolowo University) Ile-Ife in 1987.

Having had a fulfilling career in APCON, under the leadership of Dr. Josef Bel-Molokwu a thorough bred gentleman, Rotarian Akinsiku moved over to the Marketing/Customer Service Department of Optimum Exposures Limited, one of the leading Out-of-Home Advertising media firms in Nigeria, and a member of the Troyka Group.

Married to Mrs. Damilola Mercy Akinsiku with children, Akinsiku started private practice in Out-of-Home media in 2001 when he co-founded KOK Visibility Edge with two of his cousins (Adegunloye Gilbert Robert and Adebayo Folasele Felix). Today, KOK is a leading member of the Outdoor Advertising Association of Nigeria (OAAN), and operates in six geo-political zones of the Country.

Court bars Shittu from parading self as Regun family head