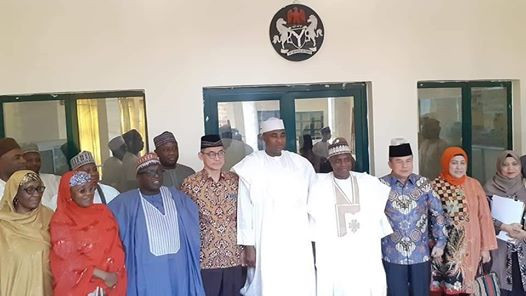 Sokoto state government is mulling the adoption of the Indonesian Pondok Pesantren Madrasah system of education as an alternative to the existing Almajiri system in the state.

The state governor, Aminu Waziri Tambuwal stated this on Sunday when he received the Indonesian ambassador to Nigeria, AVM Usra Hendra Harahap during his courtesy visit to the Government House, Sokoto.

The Pondok system employs mosques and langgar (a blend of Islamic and Western education) as well as adopts existing local institutions such as surau (Islamic assembly buildings) and pesantren (a Muslim school in Indonesia operated by religious leaders) as the places for Muslims to study Islam.

Tambuwal explained that for the state government to have a home grown system similar to the Pondok, it will consult the Sultan of Sokoto and other stakeholders in order for them to have a buy-in.

“We are intensifying efforts to ensure that the Pondok system is adopted before banning the Almajiri system. This is because we are desirous of ensuring that Sokoto children are exposed to both Western and Islamic education,” Tambuwal said in a statement signed by his Special Adviser Media and Publicity, Muhammad Bello.

While expressing gratitude to the Indonesian government for taking interest in Sokoto, he assured the Ambassador that his visit will deepen Indonesia’s relationship not only with the state but also the country, with which it shares religious, cultural and climatic similarities.

He said that the state was already pursuing further ties with Indonesia in the areas of healthcare, economy, Islamic models of business and economic enterprises.

Gov. Tambuwal further applauded the Indonesian government for agreeing to send
experts to share knowledge with the state on economic inclusion derivatives.

If I decide to make my son the chief of staff, there’s nothing anyone can do – Governor Akeredolu