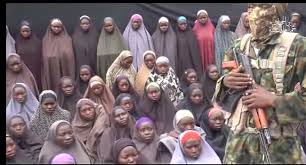 Ahmad Salkida, a Nigerian journalist known to have access to the leadership of Boko Haram, says only fifteen (15) of the remaining one hundred and thirteen (113) Chibok schoolgirls in captivity are alive.

Salkida, who made the revelation on the micro-blogging site, Twitter on Saturday, April 14, said the 15 girls still alive are no longer under the control of Abubakar Shekau, leader of Boko Haram, noting that they are now ‘married’ and only their ‘husbands’ can decide their fates.

Today, April 14 is exactly four (4) years since two and seventy-six (276) girls were abducted from Government Girls Secondary School, Chibok, in Borno state. While one hundred and sixty-three (163) have returned, one hundred and thirteen (113) of the girls are believed to be in the custody of the sect.

On the possibility of the girls returning home, the Nigerian journalist explained that no negotiation, including ransom, could secure their release, except they are divorced from their husbands.

Salkida furthered that many of the girls have died as a result of crossfires from security forces that were supposed to rescue them.

The journalist had announced on Twitter on Friday, April 13 that he would be “tweeting rare insights on the rest of the #ChibokGirls in captivity. How many are alive and the need for the parents to know the truth, no matter how unpleasant the revelation is”.

On Saturday, April 14, he tweeted: “1/ Four years ago, a middle-ranking BH commander led dozens of fighters in search of food and other supplies in the remote town of Chibok, like an afterthought, they saw a chance to abduct school girls in GSS Chibok, the girls at the time were preparing for their exams.

“The dozens of BH fighters faced no opposition during the abductn, as they struggled to convey their captives to the forest of Alagarno, the insurgent’s first war capital, which they named Timbuktu. It was in Timbuktu that they organised most of the horror we experience today.

“Some of the girls were lucky to have escaped on their way to Timbuktu that night, because there were fewer fighters to hold more than 200 girls. At the beginning, the group didn’t know what to do with the girls, at least, not in the first one month of their captivity.

“However, what many people did not know was that two weeks into the abduction, the Jonathan administration was already in touch with me for the peaceful release of the girls. By the way, I was in self-exile after pressure from the same Govt..

“I took an excuse where I was doing a menial job in the UAE (but still reporting the insurgency), to see the president, which was facilitated by Aliyu Gebi and Labaran Maku. By the 3rd of May, I was already on my way from Abuja to Madagali, Marwa and finally to a BH camp.

“I got a proof of life for the president and another for the media in case I didn’t get back. The demands of BH then were simple, they wanted detained members taken to Damaturu and they will move the girls to Buniyardi for swap somewhere in between. There was no word on ransom

“I was provided with full military escorts from Abj to Damaturu, Govt was supposed to make sure that 70 detainees were ready on my arrival in Damaturu to meet 30 there. The rest of the negotiating team was in Abj making sure the prisoners were on a plane before my arrival…

“On arrival in Damaturu, the military commander there was not briefed about my work. He was merely told to expect a VIP? At that time, the girls have been moved by BH, but there was no prisoners for exchange and I got a call from the former CDS to abort the operation.

“The president later said before me that he did not call off the swap. There was a credible window, but zero Will to rescue the girls. BH were angry. I returned to the UAE to continue my hustle, but received invitations not only by the former administration, but the current govt.

“4 out of 5 process that I was involved in, we came close to a swap deal, but Govt in most instances did not provide the platform I presented with the required expertise. And whenever Govt dragged its feet, Shekau will shift the goal post.

“I continued my reporting on the crisis, often critical of govt & BH, with both sides raising concerns. For me, I am a reporter before anything else, many officials consider me as somebody who was too independent minded for a process that needs to be shrouded in secrecy.

“Govt began to look for alternatives to conclude what I’ve started & my former couriers stepped in as the primary ‘negotiators.’ It was a break for me bcz it is no longer negotiations, but mere transaction. Another reason was my insistence that the process must be domesticated

“I was a prickle in the flesh of our leaders wt my counter claims of official narratives. A day after I exclusively released a video of the girls, something I’ve done in the past, I was declared wanted by same military that provided me wt escorts, military aircraft for assignments

“I was amazed to learn later that the terms that saw the release of some of the girls was unfavourable than what I presented, but as my friend will say, even if we come up with a cure for cancer, the war economy and elites would rather die than accept a cure from a talaka.

“Today, my painstaking investigations on the #Chibokschoolgirls revealed that just a handful of the 113 #ChibokGirls are alive. Many of the girls have died as a result of cross fires and bombardments of the security forces that no doubt were intent on rescuing them.

“I regret to state here that only 15 out of the 113 #Chibokgirls are alive today, based on my investigations in the last 3 months and we have already seen some of them in a video, which I exclusively obtained and was published on SR website.

“What is the status of the remaining 15 girls as far as negotiations are concerned? My investigations also revealed that, they are no longer under the control of #AbubakarShekau. According to sources, they are now ‘married’ and only their ‘husbands’ can decide their fates.

“If they are divorced or the men are killed that is when Shekau’s decision takes precedence, and in this instance, since the girls have been indoctrinated, their leader has no right to negotiate for their release, no matter the ransom offered, reliable multiple sources said.

“It will be unbearable to share the names of the 15 that are alive here, this is the responsibility of Govt. When I was involved I regularly provided proof of life. Govt must demand that to prove me wrong or stop negotiating for many of the girls that don’t exists… ?

“The secrecy around the condition of the #ChibokGirls and most recent #DapchiGirls debacle by those involved is the reason people like me are out of the picture. The fact remains that under the present circumstances there is NO room for peace settlement.

“The way out for these girls, is a military rescue or negotiate wt individual captors to release their ‘wives’ in return for some kind of deal, but this will mean death to these fighters bcz the terror group now sees the girls as part of their own and must be protected.

“How comes there is little or no information about the girls and both the parents and campaigners are in the dark? Because, Govt resist independent reporting of the crisis, most of the reports are choreographed & Nigerians are also not ready to hear the truth or stand by it.

“Reporting the #LakeChadCrisis is not just a job for me, Borno is my home, this crisis has affected me too. I’v invested 13yrs of my 18yrs journalism career to follow this story in a way no reporter or researcher has done, hence my knowledge of this crisis can’t be dismissed.

“I’v risked my life and that of my family in the past and even now, not only to tell the story, but to play the role of a mediator and fact finder. But as soon as the FG found alternatives, my sacrifices got an official ridicule and I am being hounded.

“I hold no other intention of doing this than the need to stir a debate to demand more insights and bring closure to the parents. The nation must not fail you from rescuing your daughters and also fail to tell you the truth”, he wrote on the micro-blogging site.

Though Salkida says only 15 of the girls are alive, Nigerian President, Muhammadu Buhari, on the other hand, has assured the parents and families of the abducted girls that their “daughters will never be forgotten or abandoned to their fate”.

Buhari, who gave the assurance on the micro-blogging site, Twitter on Saturday, April 14, appealed to the “parents to keep their hopes alive regarding the return of their daughters”, noting that the “recent safe return of more than 100 of the #DapchiGirls, following the determined efforts of the Federal Government, should give all of us confidence that all hope is not lost”.

The President tweeted: “As we commemorate the 4th anniversary of the abduction of the #ChibokGirls tomorrow, April 14, let me again assure the parents and families that their daughters will never be forgotten or abandoned to their fate.

“I appeal to the parents to keep their hopes alive regarding the return of their daughters. The recent safe return of more than 100 of the #DapchiGirls, following the determined efforts of the Federal Government, should give all of us confidence that all hope is not lost.

“My administration remains focused and determined to see that the remaining #ChibokGirls and Leah Sharibu return safely to their homes and their families. Rest assured that we are doing our very best to free the girls from their captors.

“Unfortunately, the negotiations between the government and Boko Haram suffered some unexpected setbacks, owing mainly to a lack of agreement among their abductors, whose internal differences have led to a divergence of voices regarding the outcome of the talks.

“We know that this is not the news parents want to hear after four years of waiting, but we want to be as honest as possible with you.

“We are however not relenting. We will continue to persist, and the parents should please not give up. Don’t give up hope of seeing our daughters back home again. Don’t lose faith in our ability to fulfill our promise of reuniting you with our daughters.

“Don’t imagine for a moment that we have forgotten about our daughters or that we consider their freedom a lost cause. Not on my watch!

“As long as I remain the Commander-in-Chief of the Armed Forces of the Federal Republic of Nigeria the Chibok girls will NEVER be forgotten. Everything possible will be done to have them reunited with their families”, the President wrote via his Twitter handle @Mbuhari.