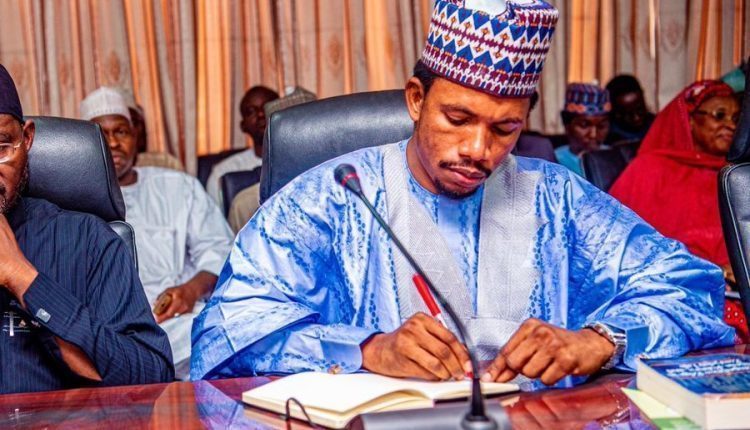 Senator Ishaku Abbo facing trial for harassing a lady in an Abuja sex toy shop has again been thrown into the limelight after a political rival was taken to court allegedly for throwing homosexual taunts at the senator.

The rival, Nurudeen Kama, who served as social media aide to former Governor Bindow Jibrila was alleged to have taunted the senator on Facebook alleging him to be bisexual and of infecting innocent girls with HIV.

Senator Abbo apparently reported him and Kama was arrested in Yola last week Friday by men of Department of State Services (DSS) over alleged defamation of character on his Facebook page following a formal complaint lodged against him by the senator was taken to court Monday afternoon by the Adamawa state police command.

In a suit filed at the Magistrate Court 4 in Yola, Nurudeen Kama is being accused of using derogatory words against the lawmaker on his social media handles (facebook), thereby tarnishing his image before members of the public.

“Therefore, comparing Tafawa Balewa with a sex toy senator is an insult to the late prime minister.”

“For the records, they cloned my WhatsApp to blackmail and put me on the defensive but I’m not moved even for a minute.

” Cliff and his bisexual friends should work more on redeeming his battered image decently and not by mischievous blackmail for God sake, what parts of Cliff Abbo’s “attention” do I need? To learn how to become a bisexual or how to deliberately transmit HIV to any girl that shows a sign of resistance to my other demands?

” If joining black magic for fame is what it means to be great, I rather buy an ovaprim and a broodstock from the next available fish farm and breed for a living.

“For those who believed in their lies or blackmail, I will not only excuse them but forgive them because most time we are ignorant of the extent idiots can go in order to blackmail you.”

Ruling on the oral bail application filed by his lawyer who is also the state APC legal adviser Barr. Shaknah Pwamaddi, the Judge directed the accused to produce two sureties which must include his blood relative and a traditional ruler in his community.

The judge stated that one of the sureties must be resident within the jurisdiction of the court and the defendant must sign an undertaking not to temper with the ongoing investigations of the matter, among other conditions.

Speaking in an interview with journalists, Barr. Pwamaddi expressed satisfaction with the ruling stressing that they are battle-ready to defend their client and prove his innocence.