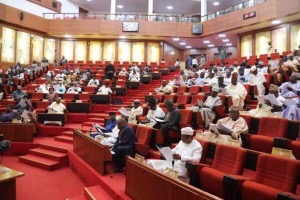 The Senate today passed the harmonised Petroleum Industry Bill which was produced by a conference committee of both chambers of the National Assembly last week.

The harmonised version of the PIB was submitted for consideration by the federal lawmakers today at plenary.

Prior to the approval of the proposed legislation through voice votes, senators from the South-South geopolitical zone protested against the proposed three per cent equity share for the oil host communities.

President of the Senate, Ahmad Lawan, however, prevailed on Senator Seriake Dickson to back down on his threat to lead his colleagues to stage a walkout.

An investigation conducted by newsmen yesterday had revealed that both chambers of the National Assembly might have agreed to approve three per cent as equity share for the oil host communities in the country.

A member of the conference committee had told our correspondent in confidence on Wednesday that the agreement was reached after a heated debate.

He had said, “The National Assembly may stick with the 3 per cent equity share for the host communities, when the Petroleum Industry Bill is eventually laid and discussed on the floor of both chambers tomorrow (Thursday).

“You will recall that when both chambers of the National Assembly deliberated on the PIB report, the House of Representatives approved five per cent while the Senate gave three per cent.

“This differential warranted both chambers to set up harmonisation committee, which would submit its report on Thursday.

“Our committee adopted the Senate recommendation of three per cent for the host communities.”