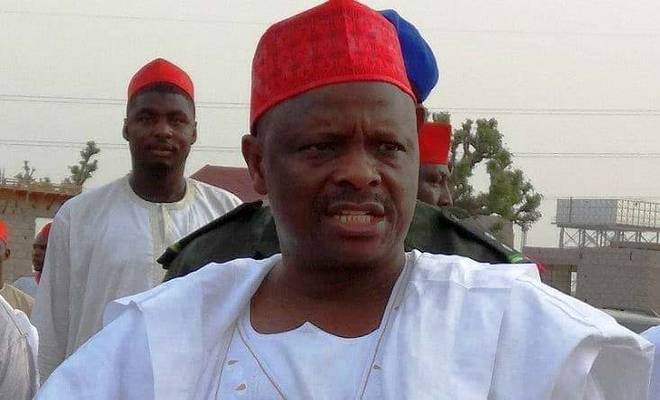 The State Police Commissioner, Rabiu Yusuf, had last week cautioned Kwankwaso, a former Governor of the state, from going home for a political rally scheduled for last Tuesday.

Daily Trust reports that same date was fixed for a rally organised by the APC in the state with the backing of the state governor, Dr. Abdullahi Umar Ganduje.

The feud between Kwankwaso and Ganduje has polarised the APC in the state.

Senate President, Bukola Saraki, said the IG should appear before the Senate Police Affairs committee. He said the committee should direct the IG to provide security for Kwankwaso to visit Kano.

The directive to the IG was sequel to a point of order by Senator Isah Hamma Misau (APC, Bauchi), on the return of thuggery in Kano State.

The Senate Committee on Police Affairs, chaired by Senator Abu Ibrahim (APC, Katsina) was asked to invite the inspector general over the issue.

Raising the point of order, Misau said the return of political thuggery in Kano popularly known as ‘Yan Daba’ was dangerous for the state’s security.

“So many times we talk about insecurity without tracing the way it started. The issue of Boko Haram started with ECOMOG when (Ali Modu) Sheriff was governor of Borno State. Now people, including women are being armed in Kano.

“The issue started when Kwankwaso was about to visit Kano; Instead of him to be allowed, the police commissioner wrote to him against the visit. Today it is Kwankwaso, tomorrow it can be anybody,” he said.

Senator Kabiru Gaya (APC, Kano) said Kano State had been peaceful in the last two years and that there were no cases of clashes during the just concluded rally in the state.

Also, Senator Jibrin Barau (APC, Kano) accused Misau of spreading falsehood about Kano and that the feud between Kwankwaso and Ganduje was a family matter.

“We are all politicians that is why sometimes, there are bound to be squabbles. But coming to the Senate to discuss backyard squabbles in the state I think it is a very dangerous trend,” he said,” he said.

Barau, while urging Saraki to caution Misau, said efforts were on to resolve the issue between Ganduje and Kwankwaso.

But when Kwankwaso was given opportunity to talk, he declined, saying “I believe, as a leader, I don’t want to say anything.”

Referring to Kwankwaso’s comment, Saraki said: “Because by his own observation, as a leader, he shows that there are issues but definitely there is still room for some kind of solution.

“There is going to be a trend of where politics will begin to creep in our efforts and responsibilities. We need to do our best to ensure that we do as much as possible to see how we can manage this kind of issues. I think we have to agree at what point it becomes a matter to come to this Senate,” Saraki said.