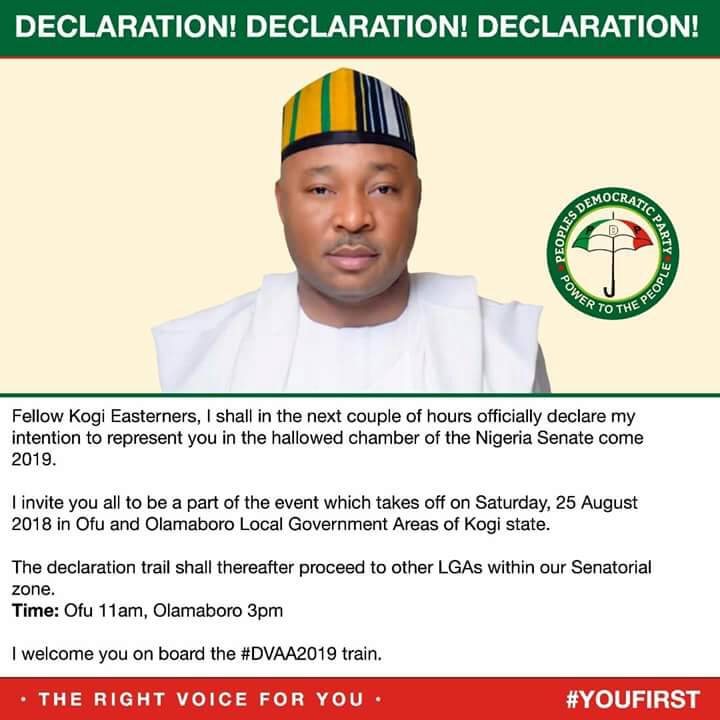 As the race for the senatorial seat of Kogi East Senatorial District at the National Assembly hots up, Sen. Attai Aidoko, the current senator representing the district has been linked to a grand campaign aimed at allegedly smearing the name of one of the leading aspirants, Dr. Victor Alewo Adoji.

According to information at our disposal, more than a dozen propagandists have been enlisted to allegedly carry out the dirty job so as to truncate the ambition of Dr. Victor Adoji to grab the candidacy under the platform of the Peoples Democratic Party, PDP.  Sen. Aidoko is also seeking re-election to the Senate under the same party, PDP in the state.

It was reliably gathered that huge sums of money running into several millions of naira have allegedly changed hands as the senator is desperately perfecting his plans to dislodge the opposition in Dr. Victor Adoji. Some of the strategic persons enlisted in the plot are the chairmen of the Peoples Democratic Party in Dekina Local Government Area, Ofu Local Government Area of Kogi State and former House of Assembly member, Friday Sani (aka Makama). This newspaper learnt that a whopping N20 million was allegedly given to Makama to facilitate this smear campaign.

Part of their briefs is to make the party hierarchy see Victor as an impostor and agent of the opposition and this involved writing several anonymous letters to party stakeholders including Alhaji Ibrahim Idris, Senator (Dr.) Ahmadu Ali and Captain Idris Wada and several others.

An excerpt from the anonymous letter reads thus: “We all understand that Zenith Bank is the official bank for Kogi state. We also understand the relationship between the APC women leader with this said candidate that the APC wants to plant in our great party. This candidate is also a staff of Zenith Bank who has helped the state in assessing huge loans. We call on our great party to be careful in giving out our party ticket to impostor who claims to be PDP loyalist. PDP Youths will NOT stand to see this happen.”

Reacting to the latest plot, Dr. Victor Adoji has waved it off as fruitless.

In a statement signed by the Director, Media and Publicity of the Victor Alewo Adoji Campaign Organization, Dr Adoji said the senator and his cohorts could not deceive the party any longer nor expecting miscalculation that they will technically capitalise on to “sneak and snatch the party.”

He further said that PDP was aware of the popularity of the character they intend to misrepresent.

“To start with, senatorial representation has no account to keep in any bank where monthly allocations flow through like the state’s, so one wonders what manner of sense it is bringing on state account domiciled in a bank to an aspirant contesting for senatorial slot, just because he is an employee of the bank and the neophytes in the state took credit from there. Does Dr Victor Adoji own the bank?”

“According to the campaign of hate and calumny, as deposed, Victor Alewo Adoji should become enemy to those close to him including his brothers and sisters in other political parties. Well, there is nothing failure and desperation will not do, but I choose to remind the author of the fabrication that the game of politics is played in the spirit of sportsmanship. Such spirit was exhibited in Katsina, during the bye election where two brothers contested on different platforms. We have actually grown beyond politics of hate; our ideals may differ but that does not cut the chord that binds us.”

“Sure, we ll disagree and pursue with all vigour our divergent views and ideologies partisan wise but certainly not being enemies. It is based on the strongest belief Victor Alewo Adoji has for the ideologies and manifestos of the party PDP that made him embrace the party, a party he has been an active member for more than a decade now,” he said.”

Continuing, the media aide said he put it to whoever carved the malicious deposition that the soaring popularity of Victor was not something hate and malice could dwarf, as the acceptance was ever high “because for 16 solid years someone bestrode the National Assembly on behalf of the good people of kogi East with nothing to point to as an achievement, not even a motion let alone bill  in the interest of the people.

“And now the same people have seen hope in the person of Victor Alewo Adoji given his antecedents and passion for his people, no amount of cheap blackmail will return you there, that trick would not work this time, Mr Senator Aidoko. Ugbamaka people want you back home, at least for the GSM network you influenced down there, it’s a big achievement.”

“Honestly when there is nothing to use against a man with capacity and whose time have being divinely ordained, cheap blackmail becomes an option.”

Concluding, he said the good people of Kogi East have given their backing to Victor Alewo Adoji,and come 2019 on the platform of PDP he shall step into the Red Chambers.

Efforts to reach Senator Aidoko for his reaction to the allegations proved futile as his mobile number was not avaialable as at press time.

Peace Is All I’m About – Kemi Nelson