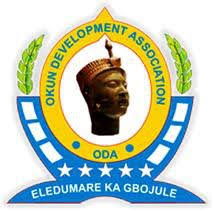 Okun Development Association (ODA), the highest body charged with the sole responsibility of overseeing the Economic, Political and Social Advancement of the good people of Okunland has appointed Engr. Segun Anjorin as the First Chairman, Lagos Branch and he has since assumed office.

The Lagos State Chapter of the Association has all along been functioning under the control of the recently declared unconstitutional and disbanded Kogi West Chapter thereby making Engr. Segun Anjorin the pioneer Chairman of the branch.

The newly appointed Chairman is from Iyamoye, Ijumu LGA. He was, at a time, the National President, Iyamoye Development Union.

He, therefore, has the needed experience, capacity and capability to positively turnaround the fortune of the Association.

He is a man of many parts that has proven his mettle to be up to the task of taking the association to the next level with his experience and vast knowledge in administration.

While wishing him a very successful tenure of office, I pray that the Almighty God will guard and guide him through.

Congratulations to the good people of Okunland, both at home and in the Diaspora.

Consequently, I appeal to all the Sons and Daughters of the land especially, those in Lagos State to rally round Engr. Segun Anjorin and give him the maximum support needed to successfully perform in office.

He needs our support to do the best for Okunland and together with him we can bring about the necessary development in our land now and in the nearest future.

As the saying goes, a tree cannot make a forest, let us join hands with him so that he can succeed in this new task.