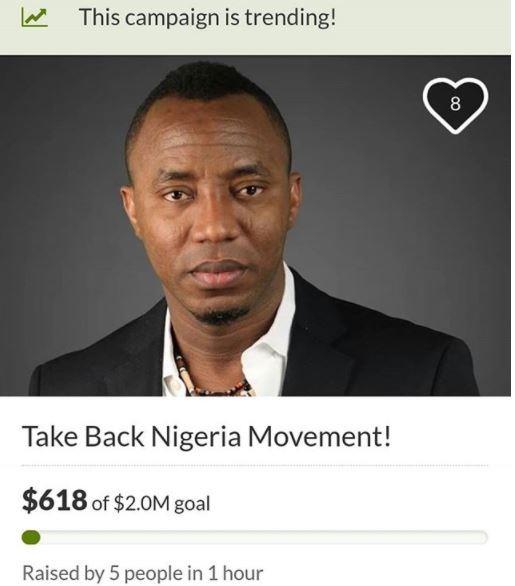 few days ago, Sahara Reporters publisher, Omoyele Sowore opened a GoFundMe account with the intention of crowd-sourcing funds of up to $2 million dollars for his presidential campaign in Nigeria.

GoFundMe has however taken down the page and suspended him from using the platform to raise political funds.

According to Sowore who shared the news, ‘GoFundMe Just Alerted Us To The Suspension Of Our Fundraising Efforts On Their Platform! Apparently, our opponents have panicked and massively reported the fundraising effort considering how successful it was. There is no going back!’.

Sowore then went on to attack the Senate President, Bukola Saraki saying he’s the one behind the suspension of the account.

‘It just came to my notice that the Kwara thief who leads the Nigerian Senate and his apprentices were behind the reporting of our GoFundMe fundraising as “Fraud”. We learned he panicked soon as he saw that Nigerians were supporting our Revolutionary Movement.  This Act In Itself Will Not Delay His Day Of Judgement’.

2019: Crack in APC as senator says Governor does not deserve second term