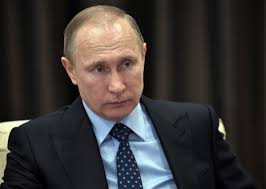 Russia has developed a new array of nuclear weapons that are invincible, according to President Vladimir Putin.

Mr Putin made the claims as he laid out his key policies for a fourth presidential term, ahead of an election he is expected to win in 17 days’ time.

The weapons he boasted of included a cruise missile that he said could “reach anywhere in the world”.

He said of the West: “They need to take account of a new reality and understand … [this]… is not a bluff.”

Giving his annual state of the nation speech, Mr Putin used video presentations to showcase the development of two new nuclear delivery systems that he said could evade detection. One video graphic appeared to show missiles raining down on the US state of Florida.

One system Mr Putin described included a “low-flying, difficult-to-spot cruise missile… with a practically unlimited range and an unpredictable flight path, which can bypass lines of interception and is invincible in the face of all existing and future systems of both missile defence and air defence”.

Another was a submarine-launched, long-range missile capable of delivering a nuclear warhead.

During the two-hour televised speech to a joint sitting of both houses of parliament, he said the weapons were a response to US development of its missile defence system.

The US State Department said it was “certainly unfortunate to have watched the video animation that depicted a nuclear attack on the United States” – adding that it was not “the behaviour of a responsible international player”.

Mr Putin faces seven challengers on 18 March, although none is expected to attract widespread support. The president played no part in a raucous televised debate broadcast on Wednesday that featured the other candidates.

Absent from the campaign is prominent opposition leader Alexei Navalny, who has been barred from running and has called on voters to boycott the poll.

President Putin has so far done little campaigning, and until now has said little about his plans for the next six years.

Before today, Vladimir Putin had delivered 13 state of the nation addresses. Address Number 14 turned out to be very different from anything that had come before.

Standing in front of a giant video screen, President Putin showcased Russia’s very latest strategic weapons. Like a magician pulling one rabbit after another out of his hat, he wowed his audience with images of cruise missiles, intercontinental ballistic missiles, underwater drones and supersonic jets.

Russian MPs and senators applauded the military video show, which dominated the second half of President Putin’s speech.

There was a double message here. Firstly, to the West: don’t push us. And, with elections coming up, there was this for the Russian people: Vote for Putin and you’ll be voting for national security.

I suspect the concluding image was designed to reinforce just that: s Vladimir Putin stood to the national anthem, a giant Russian flag appeared on the video screen behind him. It is a message that is likely to strike a chord with many here.

Mr Putin tailored the first half of his speech towards working Russians and their concerns.

He pledged to halve poverty in the country within the next six years and said he wanted life-expectancy rates to emulate Japan and France.

“Every person matters to us,” he said, adding that he also wanted to increase employment and longevity.

In 2000 there were 42 million people in Russia living below the poverty line, he noted; today there were 20 million, but this still needed to come down.

He warned Russians not to take the country’s power for granted.

“Russia is now a leading country with a powerful foreign economic and defence potential,” he said.

“But from the point of view of the extremely important task of ensuring people’s quality of life and welfare we, of course, have not achieved the level we require. But we have to do this and will do this,” he added to applause.

Mr Putin also pledged to spend more on roads and reduce accidents; said teachers deserved good salaries and wages; and said there should be better access to both the internet and medical services for people in remote areas.

How credible are weaponry claims?

President Putin’s emphasis on a strong Russia modernising its nuclear arsenal is a reflection of similar statements over recent months from his US counterpart Donald Trump.

In his remarks, Mr Putin highlighted the development of two new nuclear delivery systems, which, he said, could evade US anti-ballistic missile defences.

This is essentially because neither of them are ballistic missiles, which are fired out of the atmosphere in a high-arcing trajectory.

One – effectively a very long-range nuclear-tipped torpedo – has been rumoured to be under development since Soviet days but is now seen by US analysts as a credible threat.

China and the US are also working on similar systems of their own.

Digital growth was also essential, Mr Putin said during his speech. He said he wanted Russia to become one of the world’s main hubs for storing and processing big data.

He called for more progress in making robots and artificial intelligence. New talent in technology should be nurtured and foreigners should be encouraged to study in Russia, he said.

Mr Putin also spoke of Russian operations in Syria – supporting the Assad government’s fight against rebels – which, he said, showed off the country’s increased defence capabilities.

Russia recently sent two of its most advanced fighter planes, Su-57s, to Syria, even though they are still undergoing tests.

Mr Putin also announced that a bridge to the Crimean peninsula would be open within the next couple of months. Russia annexed Crimea from Ukraine in 2014, during Mr Putin’s current term in office.

Russia was safeguarding its interest in the Arctic region by strengthening its military infrastructure in the region, he said.