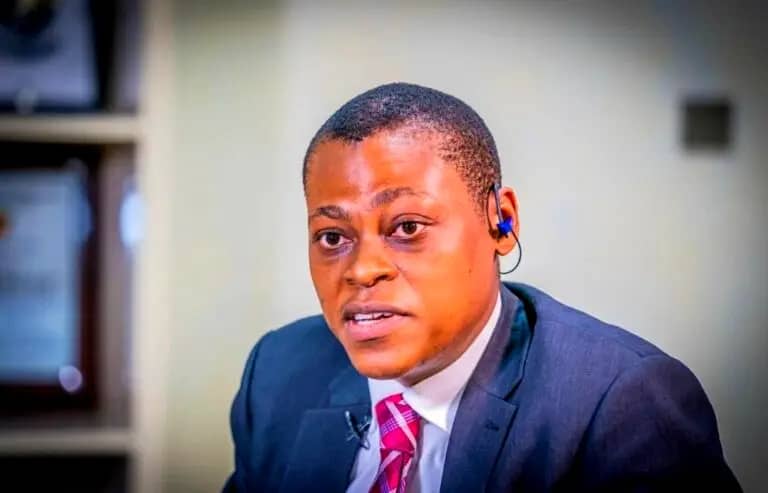 From his utterances and notoriety for talking down on his guests, Arise TV’s Morning Show co-anchor, Rufai Oseni, warts and all, has turned into a loose cannon, without a doubt.

Truth be told, his unconvincing pseudo intellectual posturing is sure not doing him any good. His chip-on-the-shoulders, arrogant, and I-know-it-all demeanor while on air, though excitable to him, is not boding well with discerning viewers of Arise TV.

This Monday morning, Rufai again displayed his penchant and undying love for quoting apocalyptic statistics. But, it was gratifying he more than met his match in Comrade Ayodele Adewale, a former Chairman of Amuwo Odofin Local Government.

Interestingly, Bolaji Tunji, former Editor-in-Chief of New Telegraph, paid attention to what transpired on today’s edition of the ‘Morning Show’ and thus wrote on his Facebook page: “This Hon. Ayodele, former Chairman of Amuwo Odofin LG and the State Organising Secretary of APC is quite brilliant. The fact that a figure was given by UNESCO about out-of-school children and maternal mortality rate does not make it infallible. His riposte was brilliant.”

Rufai is very fond of quoting WHO, UNDP, World Bank, UNESCO and other statistics of doubtful status on ARISE TV as if they are holy grail. Pray, what is the basis for a TV presenter to permanently wear a sadistic countenance while discussing issues about his country? Rufai’s habit of digging scorched-earth data just to force a guest to align with his jaundiced point of view is becoming a put-off and an embarrassment.

I find it quite irritating when TV anchors, who ideally should educate viewers from a broad and informed perspectives, gleefully quote data on poverty, out-of-school children and other misery index figures about Nigeria. These figures, more often than not, do not make sense.

Many questions would suffice: how are these data/figures arrived at? What empirical, scientific and realistic yardsticks were used in arriving at such figures? Who did the headcount to arrive at the figures being bandied around? Are all of these the handiwork of desk officers in a cosy office in Washington and other Western capitals who are far detached from the realities we face here?

It is also quite worrisome that each time these imperialist organisations with their own agenda label Nigeria as the poverty capital of the world, our journalists and public intellectuals are quick to embrace such unflattering and demeaning narratives, even while other countries vehemently reject such labels.

India, United Kingdom, United States and many other nations have had cause to reject some of these reports in the past while we giddily lap them up with relish.

Let’s interrogate a few of these claims. First, are the people labelled poor in Nigeria and across Africa actually “poor” in the truest sense of the word? Is the definition and classification of poverty in Europe and America the same as Africa? The answer is No!

While a person may not be able to live on $2 per day in the US, an African can live on same amount per day with good meal. While not denying issues of poverty and other human development challenges we face, can we at least subject some of these pejorative conclusions to rational and rigorous thinking and analysis?

To the much rehashed out-of-school children figures, what explains the perennial increase in the numbers despite annual school enrollment in public and private primary schools across the country?

For most part of this new century, 13 million have been claimed as the number of Out-Of-School-Children. I recall reading the report of a UNESCO Country Representative, who said the number dropped to 10 million in Nigeria some four years ago. Question is, at what point did it balloon to 20million again given the fact that many states government are building more primary schools and expanding number of classrooms to accommodate more pupils? Why are we not getting the number of annual school enrollment per State from same people/organisations that are always trumpeting the figures of those not in school?

Just last week, the world celebrated the World Teachers’ Day. It was a special occasion for state governors and the Federal Government to reel out what have been done to improve education at primary and secondary levels. I took my time to read the speeches of many governors on this issue and all of them spoke about how they have built new schools, renovated existing ones and employed more teachers. No one or organisation has disputed these claims.

The outgoing governor of my State, Dr. Kayode Fayemi in his speech, disclosed that he built 10 new secondary schools and 6 new primary schools in the last four years to take care of the increase in enrollment, which increased from 191,000 in primary school to 263,000 within the period. Lagos State government has also done remarkably well in this regard. From the Asiwaju Bola Tinubu era to the present administration under Mr. Babajide Sanwo-Olu, hundreds of new classrooms and schools have been built and expanded in the last 22 years. The story is similar across the other States and the FCT with special intervention fund from Universal Basic Education Commission (UBEC).

So, who are the governors building new schools and classrooms for if the number of Out-Of-School-Children keep galloping year-in, year-out? This remains a puzzle to decipher.

For me, it is not just enough for these multilateral institutions to throw any figure at us for show hosts like Rufai Oseni to parrot on national television without such being subjected to critical scrutiny.