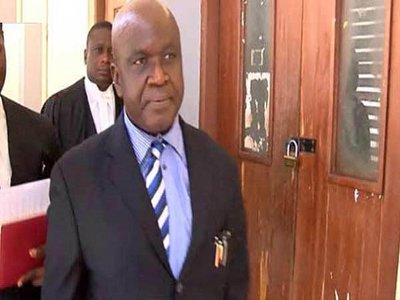 A Lagos High Court in Igbosere yesterday dismissed the no-case submission made by a Senior Advocate of Nigeria (SAN), Rickey Tarfa.

Justice Adedayo Akintoye ruled that the prosecution – Economic and Financial Crimes Commission (EFCC) – had established essential elements of the offences it brought against Tarfa.

The judge noted that the justice of the case thus requires that the court should demand some explanation from the defendant in respect of the charge.

She ordered Tarfa to enter his defence on the next adjourned date, March 13, 2018.

Justice Akintoye also dismissed a claim filed by the Learned  Silk seeking N520 million from the EFCC as damages for alleged malicious prosecution.

The judge described it as unmeritorious.

The EFCC arraigned Tarfa on March 10, 2016 on a 27-count charge which was subsequently amended to 26 counts.

He was accused of the alleged willful obstruction of authorised EFCC officials, refusal to declare assets and giving false information to a public officer, by lying about his age.

The agency also alleged, among others, that the lawyer offered N5.3million gratification to Justice Nganjiwa in order to compromise the judge.

Last January 17, the Silk, through his counsel, Abiodun Owonikoko (SAN), made a no-case submission asking the court to dismiss the charge because it was malicious.

He prayed the court to make an example of the anti-graft agency and “slam the hammer” on it with a N500m damages award.

”The specific ingredients were not proven. It is not as if the prosecution did not make an attempt, but that the attempt was so woeful,” Owonikoko submitted.

But the EFCC counsel, Mr Rotimi Oyedepo, opposed Tarfa’s no-case submission, “because it amounts to contesting the obvious.”

According to  Oyedepo, Tarfa misconstrued the no-case submission.

However, in her ruling yesterday, Justice Akintoye upheld the prosecution’s argument that a prima facie case had been made against the defendant.

The judge said: “What is expected of this court at this stage of no-case submission is to look at the evidence adduced so far and determine whether a prima facie case has been disclosed against the defendant.

“I have carefully evaluated the evidence so far, with the totality of evidence adduced before this honourable court, it is my opinion that the prosecution has established the essential elements of the alleged offences with which the defendant is charged.