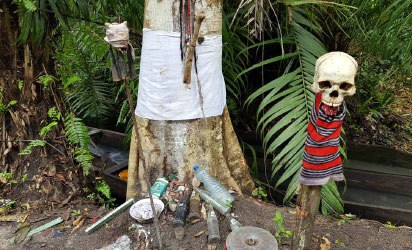 There was apprehension in Agura community, Ikorodu, Lagos Mainland, on Monday, April 9, 2018, as residents of the area discovered a mysterious shrine months after relative peace and calmness returned to Ikorodu and environs.

The development is coming just after the Lagos State Police Commissioner, Imohimi Edgal expressed his delight in how his Command degraded crimes, cult killings and kidnappings in Ikorodu and other parts of Lagos.

According to reports, the discovery suspected to be a ritualist’s shrine was found in an uncompleted building located in the outskirts of Agura, Ikorodu.

In a report by Vanguard, the building allegedly belongs to an elderly man (names withheld) who died few days ago after which his younger brother took possession of the said building, as the deceased’s immediate family reside outside the community.

It was learned that the immediate family visited the place on Monday night towards preparation for the burial only to discover an existing shrine erected by their uncle.

According to reports, blood-soaked clothings, local calabashes, clay pots filled with blood among other items were discovered in the building.

Upon visiting the scene, the Police further uncovered more items including human parts and charms. The suspect was said to have taken to his heels before the arrival of the Police.

This development has however led to panic on the part of residents of the community.

A source who spoke to InsideMainland said some members of the CDA group had visited homes to allay the fears of residents some of whom were seen fleeing the area for fear of the unknown.

Meanwhile, the Police Division in the community has assured residents of their safety as the officers intensified patrols and with more officers mobilized to the area.

Next Edition Of #BBNaija Will Be Hosted In Nigeria – Censors Board