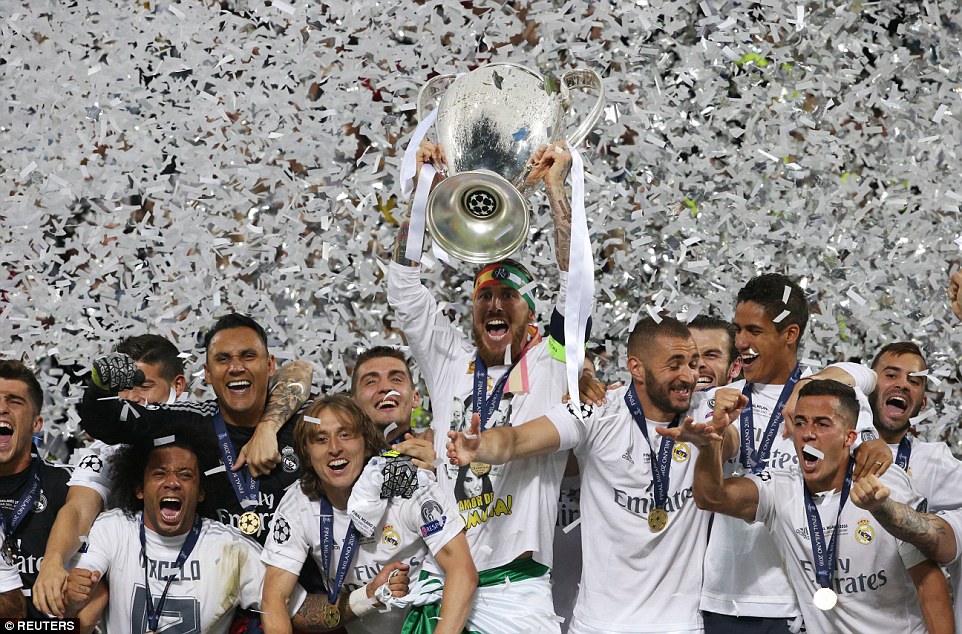 By the end he could barely walk. He looked as though he played half injured from his thigh strain. He was some way from his best. And yet, come that final moment, when Real Madrid needed a penalty to be scored to win a record eleventh European Cup, it was, of course, inevitably Cristiano Ronaldo who stepped up.

Somehow, he is destined to dominate, even when not at his best. A season which has often been chaotic, haphazard and saw Rafa Benitez dismissed and a rookie coach appointed in Zinedine Zidane, ends in a historic achievement.

As for their cross city rivals, Atletico, it ends desperately again. In 1974 they came within minutes; in 2014, against Real Madrid, they came within seconds. Last night they came within a penalty kick of this trophy. Juanfran, so excellent in the game, was their fall guy hitting the post on Atletico’s fourth penalty, allowing Ronaldo his moment.

Before him, Lucas Vazquez, Marcelo, Gareth Bale and Sergio Ramos had all confidently rolled their penalties into the right-hand corner. Antoine Greizmann, Gabi and Saul had done the same, but to the left side, for Atletico.

It was excruciating to watch them miss out again, having disposed of Bayern and Barcelona and with their commander in chief, Diego Simeone, managing to hold his own on a fraction on the budget of his opponents. Yet succumb they did and Real Madrid have transformed a season which threatened to be awful into something glorious.

Real Madrid have spent good parts of this season looking like a mal-adjusted collection of ego-centric multi-millionaires. On Saturday night, they actually started like a team; a good one at that.

True, they have come to appreciate that Casemiro is more than just an adornment to sit on the bench while James attends to the important business of selling shirts, but rather a vital part of the team who adds balance. And, having accepted that, then they have a midfield to overwhelm even the hard-working Atletico.

In addition, if Gareth Bale, Karim Benzema and Cristiano Ronaldo had worked all season as hard as they did on Saturday, they would have received just as much praise as Luis Suarez, Lionel Messi and Neymar. In the opening thirty minutes of the game, they put on a performance which came close to that Barca trio at their best. And Bale was the busiest of them, grabbing hold of this final and imposing his presence like great players do.

He did so despite rather than because of a fellow Briton officiating. Mark Clattenburg let so much go in the opening exchanges that he was surrounded by Pepe and Sergio Ramos on pretty much a minute-by-minute basis as they requested yellow cards for their opponents. Ironically it was Real Madrid’s Toni Kroos who finally transgressed sufficiently for Clattenburg to reach for his notebook, with a cynical trip on Antoine Griezmann.

Unsurprisingly, given the level of physicality on both sides, free kicks were major features. Bale was brought crashing down by Gabi on seven minutes as he advanced determinedly. He then swung in a lovely free kick which Karim Benzema, from around four yards out, somehow managed to miss, though credit to Jan Oblak, who stood strong and parried the touch away.

15 minutes into the match, Kroos chipped in another free kick which Bale did well to flick on with a back header. The ball fell Ramos, three yards out, who just managed to touch the ball home, Oblak helpless this time. Diego Simeone’s ire though was rightly directed and Clattenburg and his assistants, Ramos having been offside.

Atleti threatened to be overwhelmed. Real Madrid looked to be in complete control, with Casemiro dictating tempo and Kroos and Luka Modric dominating midfield. Desperately Simeone gestured from the bench for his team to slow play down, catch their breath and come again. They did so, as the half drew to a close, edging their way back in and reminding their richer neighbours of their own qualities.

Filipe Luis found Gabi who chipped a wonderful pass into the path of Griezmann, whose volleyed first time, driving goal-wards but saw Keylor Navas equal to his striker, the Real Madrid keeper pushing it away on 36 minutes. Griezmann then went close on 43 minutes, shooting low and just past the post from outside the box. They were small encouragements but enough for Atleti to remind themselves of their past heroics.

And second half they immediately revived hope, Griezmann playing in Fernando Torres, who drew the challenge from Pepe. Clattenburg awarded the penalty, correctly. It wasn’t a bad foul; but it was a foul. Griezmann stepped up for the penalty. Keylor Navas was booked for trying to delay it. The Frenchman struck it hard and high. It struck the underside of the bar and bounced away to safety. It felt like a crushing blow. 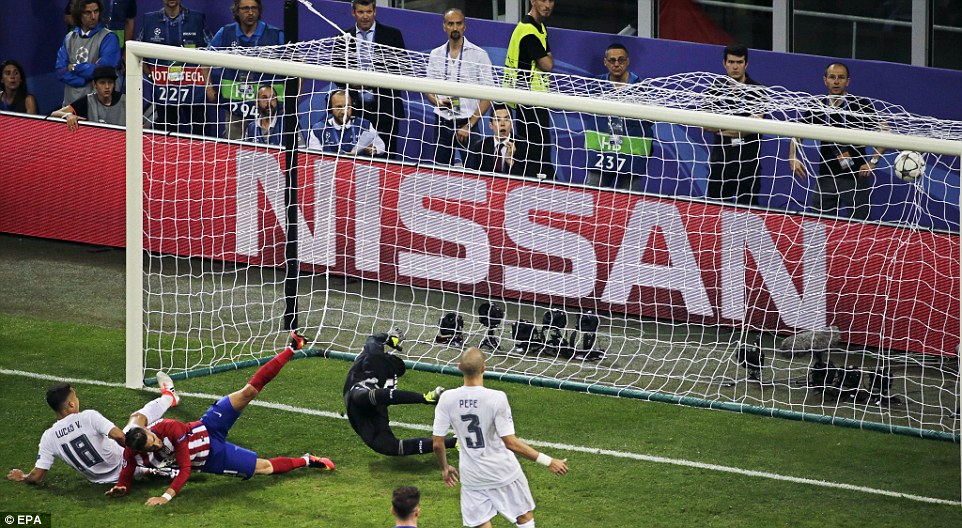 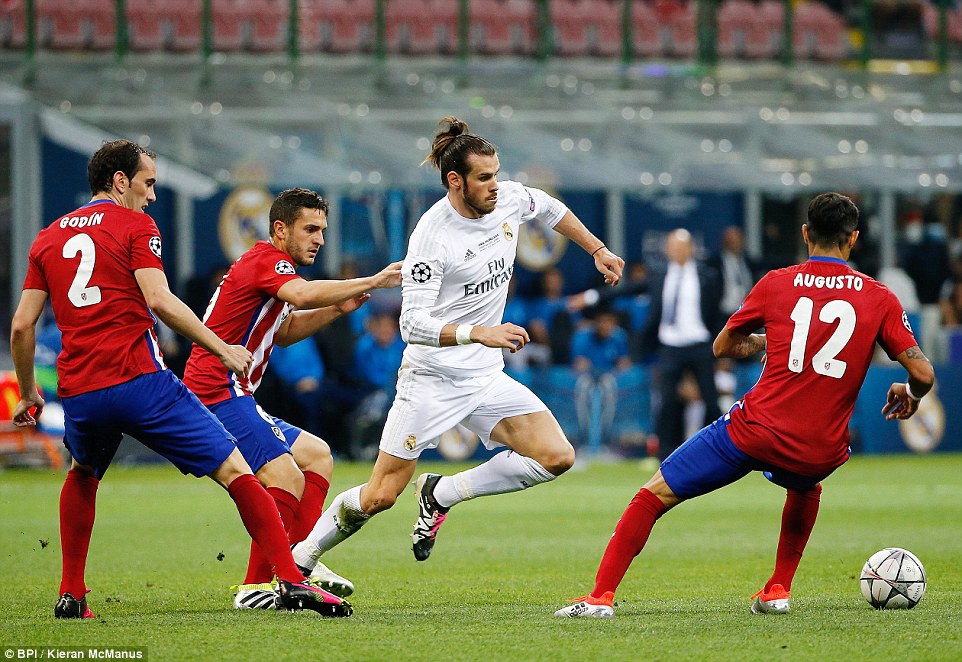 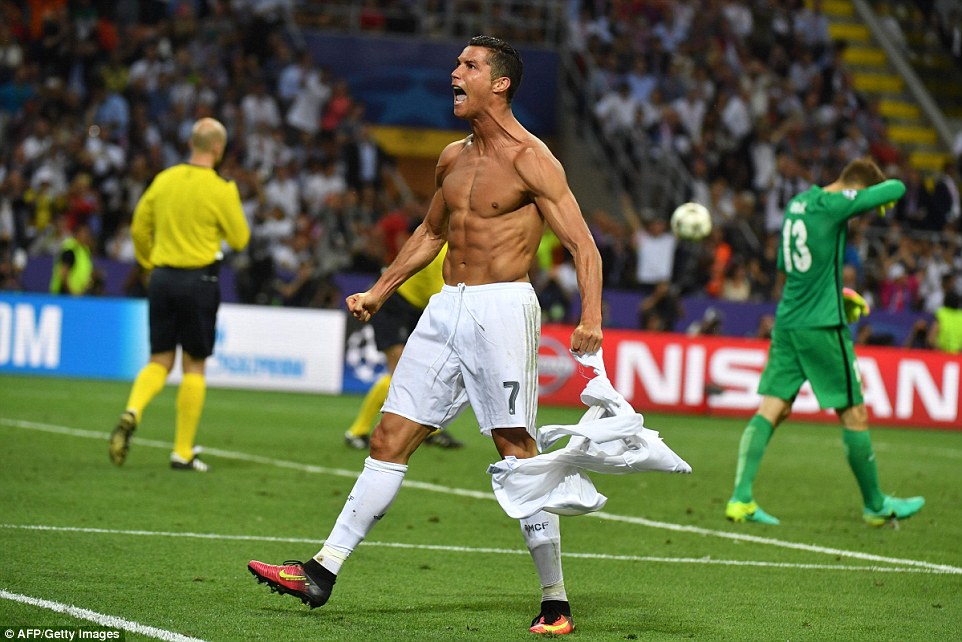 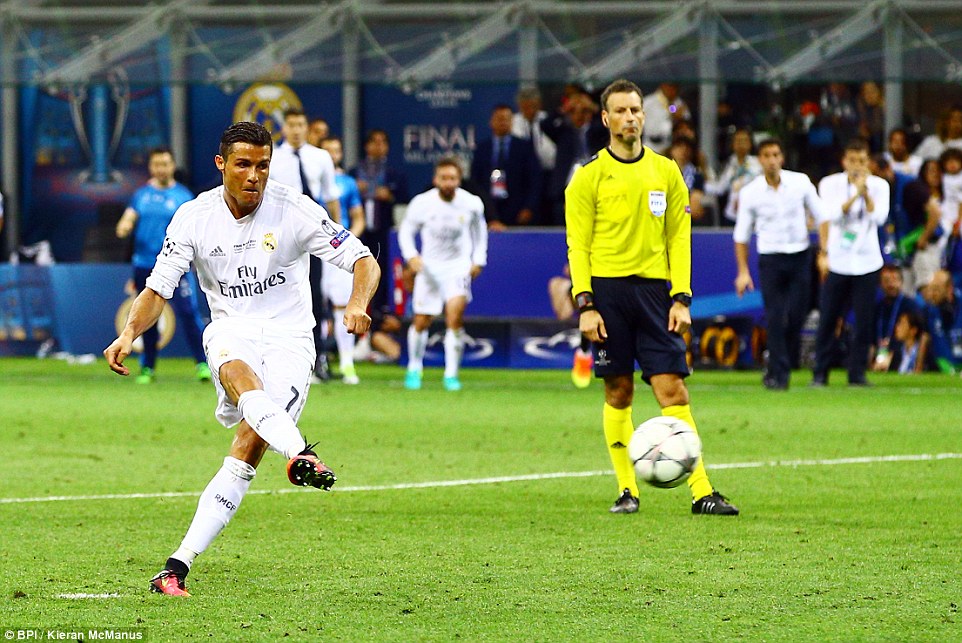 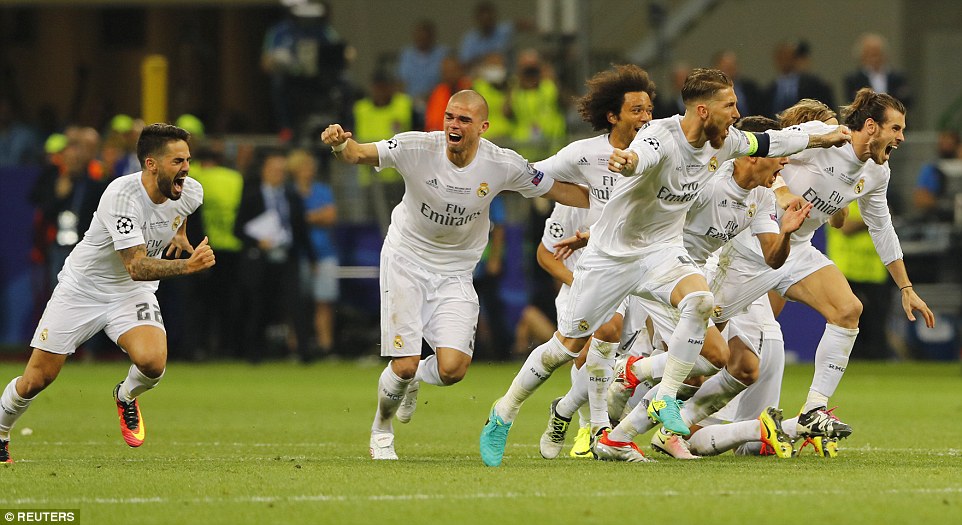 And yet Atletico would come again, Greizmann shining despite his miss. They dominated possession for the next fifteen minutes of play. It was hard to break through Real Madrid’s lines, but Koke almost managed it on 58 minutes with a strike just wide. Then Yannick Carrasco, on a sub, broke down the right, pulled in a cross which Saul Niguez produced an acrobatic flick which almost beat Navas.

Their fans never faltered, urging them on constantly, gradually growing in confidence that their equaliser would come. Yet on the break, Real Madrid were inevitably dangerous. Just past the hour, Modric picked out Benzema with a delightful pass. The Frenchman sprinted goal-wards and it felt as if a defining moment was coming.

He struck wel but Oblak, who had been excellent, was again equal to the shot, parrying away. On 78 minutes, Oblak was on hand to thwart a Ronaldo attempting an elaborate dummy when a straightforward finish would have done, while, from the rebound, Bale’s shot was cleared off the line.

From the counter, Atleti struck, a lovely lofted ball releasing Juanfran. He fired it across goal and Carrasco was racing in to slide it home from a few yards out in front of Atleti’s jubilant fans.