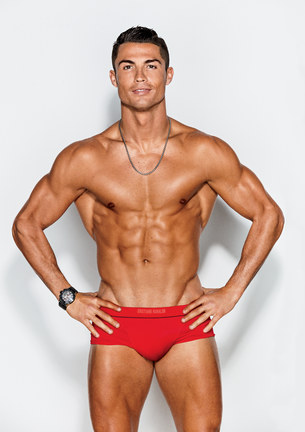 Real Madrid superstar Cristiano Ronaldo has confirmed he has become a father for the second time after the birth of his twin boys via a surrogate mother.

The 32-year-old revealed on Facebook that he was leaving the FIFA Confederations Cup in Russia, where he was captaining Portugal, to ‘finally be with my children for the first time.’

It comes a month after it emerged his young family could grow even larger in the coming months, with his 22-year-old girlfriend Georgina Rodríguez rumoured to be five months pregnant.

The free-scoring forward, who has a seven-year-old son – Cristiano Ronaldo Jnr – from a previous relationship, uploaded a photo to social media last month which showed him affectionately holding Rodríguez’s stomach.

Last night, Ronaldo revealed he had been allowed to return home from the tournament. Hours earlier Portugal had been eliminated from the cup following a penalty shoot-out defeat to Chile.

He will be allowed to miss Portugal’s third-place play-off against either Germany or Mexico in order to return home to his family.

According to the Portuguese TV channel SIC, Ronaldo had a boy and girl named Eva and Mateo via a mother on the west coast of America.

‘I was in the service of the National Team, as it always happens, body and soul, even though I knew my two sons were born,’ said Ronaldo, in a statement on Facebook.

‘Unfortunately, we have not been able to achieve the main sporting objective we wanted, but I am sure we will continue to give the Portuguese joy.

‘The President of the Portuguese Football Federation and the National Selector had an attitude today that sensitized me and I will not forget.

‘I am very happy to finally be able to be with my children for the first time.’

It was reported earlier in June that the former Manchester United star had become a father for the second time with a surrogate mother. There were also reports that Ronaldo’s mother had already visited them.

The Portuguese Football Federation confirmed their top player had been given the nod to leave the Confederations Cup early ‘so that he can finally get to know his children.’

‘The athlete, despite the birth of his children, made a point of being in the service of the National Team, in a gesture that we must underline and praise.

‘The President of the FPF and the National Selector understand that if it is impossible to reach the goal of winning the Confederations Cup, they must release the athlete so that he can finally get to know his children.’

Earlier this month, the star’s sister Katia Aveiro appeared to have confirmed reports that the football ace had become father to twins.

As she appeared on the show, alongside her partner and son Dinis, she was quizzed by presenters on a host of personal questions, one of which saw her asked is her brother had become a father once again – to which she answered ‘Maybe’.

In Katia’s appearance on the show the hosts of the programme quizzed her on the arrival of the twins, to which she merely said maybe – yet Dinis cheekily said yes, although she dismissed this and said he was too young to know what ‘s happening.

Henry Onyekuru speaks on his move to Everton