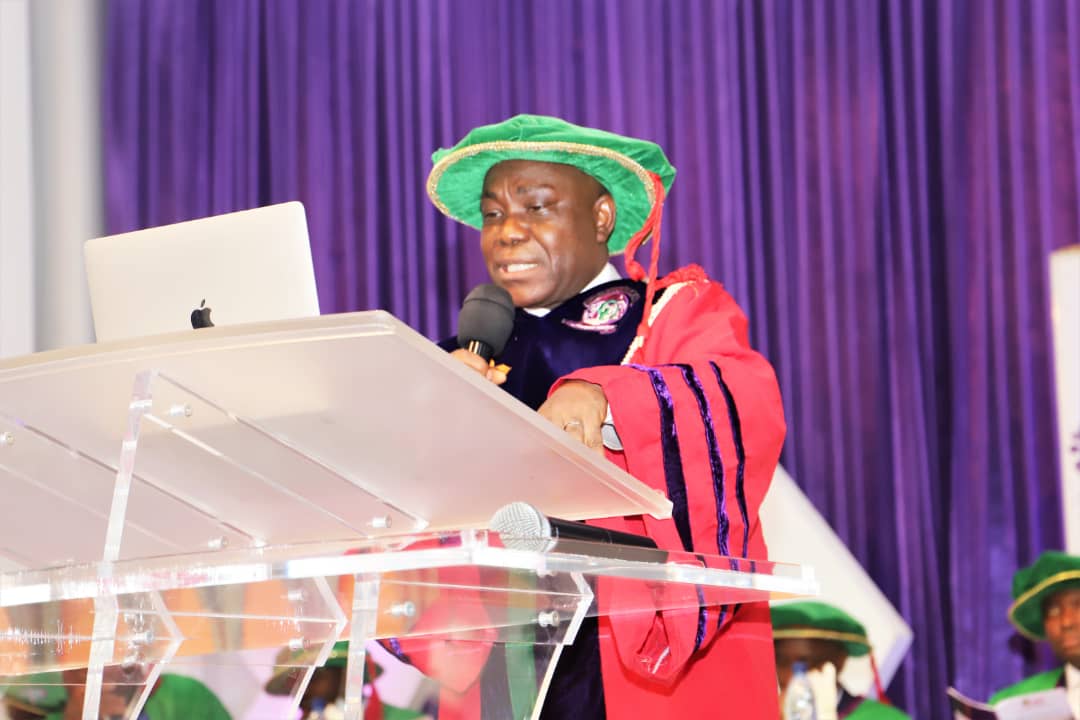 A professor of English (Discourse Analysis and Media/Digital Communications), Innocent Chiluwa, has recommended that, people imbued with the power of words should adopt an approach that positions them as builders by the words they speak as they can transform the society by consciously and deliberately engaging in the discourses of peace.

Professor Chiluwa, who is the Head, Department of Languages and General Studies, Covenant University, gave the admonition on Friday, March 26, while delivering the 23rd Inaugural Lecture of the University titled ‘Language in Conflict and Peace: Representation of Identities and Interests in the Media and the Internet’.

He said that the study he has made of conflict and peace discourses in the media and the Internet in the past years had shown that manipulative and hateful use of language by government officials, social groups, members of the civil society and individuals engaged in online civil engagements were capable of destroying or building the rubrics of society.

The inaugural lecturer asserted that much of everyday conversation and public opinion about conflict or war was inspired by the mass media. He said that speakers and writers routinely refer to the television or the newspaper as their source of information and authority of knowledge or opinions about ethnic/national conflicts

Professor Chiluwa said that Public perceptions of war or conflict were often the reflections of media framing and representations of the conflicts. “Unfortunately, living with certain ideological and sometimes dangerous perceptions of conflict or war may be far-reaching as people continue to relive the horrors of war as well as remain in fear of a resurgence of such wars,” he stated.

According to him, much of literature on the representation of war and conflict in the media had documented “a long-standing preference for war” rather than peace by journalists who manipulated their reports in favour of the certain ideology of war. He added that, unfortunately, the manipulation of war journalism has also resulted in high casualties among some particular minority groups.

Professor Chiluwa said that the study of conflict and peace discourses in the media and the Internet that he had done in the past years showed that manipulative and hateful use of language by government officials, social groups, members of the civil society and individuals engaged in online civil engagements were capable of destroying or building the rubrics of society.

The inaugural lecturer, who advised that the topic of conflict and peace discourses should not be viewed from a perspective that limits its relevance only to digital media and cultural politics, said that the lecture had a general application to people in every sphere of life. Discourses of conflict such as linguistic violence and hate comments as “speech acts” are common in homes, schools, offices – even in churches, he contended.

While averring that the future of a society was in the hands of its inhabitants, the inaugural lecturer recommended that everyone – armed with the power of words – should adopt an approach that positions them as builders at the workplace, at home, or in their relationships by the words they speak. “We can transform our society by consciously and deliberately engaging in the discourses of peace. We can also promote the positive use of the media and the Internet for peaceful co-existence.”

He admonished faculty members that what they say or write and how they say them in their classrooms, laboratories, Departments and Colleges would prove whether they were driving the vision of Covenant University or not.

“What we say to our students, supervisees and trainees can build in them the power to become the leaders we envisage; and transform even the weak ones to change agents in our nation and the global stage.

“Conversely, our words can indeed destroy their initiatives and potentials, corrupt their minds and jeopardize their destiny – which in turn will mean that we have jeopardized the future of the nation and Africa as a whole. God forbid. Let us embrace and support the discursive practices of peace – engaging the transformative power of language to build the future that we desire,” Professor Chiluwa advised.

In his comments, Pastor Adeniyi Beecroft, a member of the Covenant University Board of Regents, representing the Chancellor and Chairman, Board of Regents, Dr David O. Oyedepo, congratulated the inaugural lecturer, Professor Chiluwa, for the delivery of a wonderful lecture. He thanked him for giving the audience something very pertinent.

Pastor Beecroft reckoned that Nigeria was a nation riddled with babel of voices. He likened the situation to the biblical story of the Tower of Babel that explains the origins of the multiplicity of languages. He said God was concerned that humans had blasphemed by building the tower to avoid a second flood so God brought into existence multiple languages. Thus, humans were divided into linguistic groups, unable to understand one another.

He said that Nigerians seemed to have been afflicted in the drama of confusion of tongues, and their languages seemed not to agree with one another. “We have a government whose commitment to the fight against Boko Haram was rather suspect. The government seemed not willing to arrest and prosecute them. On the other hand government is considering amnesty for Boko Haram. It is this confusion that seemed to have dominated every facet of Nigeria’s national life,” he averred.

While stating that the inaugural lecturer had done a brilliant analysis in the discourse of the various discordant tunes, Pastor Beecroft noted that in the midst of all the confusion in the country, a group had been enjoying a strange unanimity amidst the confusion – the leadership of Nigeria’s Pentecostal churches. There seemed to be general agreement about injustice in Nigeria, he stated.

Pastor Beecroft said events had proved that it was not by sheer coincidence that the epicenter of South-West Nigeria had the largest concentration of tabernacles, large places of worship where messages of peace were preached.

Earlier in his welcome remarks, the Vice-Chancellor, Covenant University, Professor Abiodun H. Adebayo, said the inaugural lecture series was instituted to celebrate the significant milestone of attaining the professorial height in academia by esteemed professors. The platform was to acknowledge and showcase their academic accomplishments and by extension create awareness about the research prowess of the University by providing sustainable solutions to the prevailing challenges in our society, he added.

According to Professor Adebayo, Language played a major role in shaping people’s perception of the world; it was considered by authorities as the major linkage to the mind of the people; and it could foster peace and harmony among individuals, and societies. “Similarly, it has the clout to create conflicts within and/or between people. Indeed, language has the propensity to shape the words, thoughts and actions of man,” he noted.

While citing Nigerian as an example of a polity comprised of citizens who are distinct politically, religiously, ethnically, sexually, among other characteristics of societies, the Vice-Chancellor acknowledged that these differences in language and social orientations had been a source of miscommunication, disagreement, tension, and conflict in the nation due to supremacy rivalries among the groups to advance their identities over other identities.

He said the use of language in a conscientious manner was becoming a critical political and social problem within and among states. “The advent of social media and the Internet has afforded people unhindered platforms to exercise their freedom of expression. Social media have introduced new communication practices, encouraged novel forms of interaction, shaped different shades of expression, and stirred wide participation in discourses. The role of social media and the internet are increasingly significant in representing identities and interests in conflict and peace situations,” he stated.

Professor Adebayo said Covenant was keen on steering and engaging in public discussions that would reshape the people’s national values and lubricate their drive towards national development in all spheres. He added that Covenant University’s inaugural lecture series was one platform where she proactively engaged the Nigerian public and indeed the world in the discourse of topical challenges that positively impacted the society.

Also in attendance at the lecture were the Registrar, Dr Oluwasegun Omodiora and other members of Management, Deans of the School of Postgraduate and Colleges, members of the Senate, faculty, staff and students, family members of the inaugural lecturer, and distinguished guests.