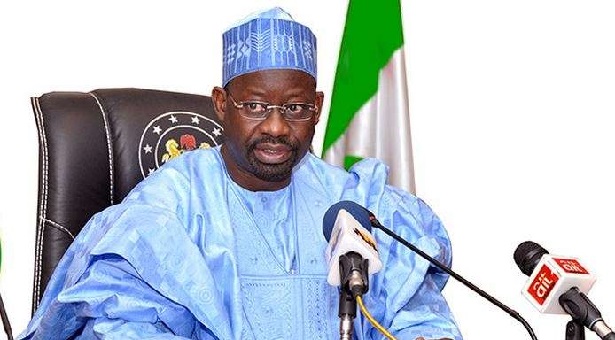 The Presidential Investigation Panel on the Special Anti-Robbery Squad has resolved to summon Governor Ibrahim Dankwanbo of Gombe over the death of one of his personal aides.

Tony Ojukwu, chairman of the panel disclosed at its resume sitting on Wednesday in Maitama, Abuja.This was in relation to a petition written by Law Chambers of Sunny Olorunmola on behalf of one Okon over the death of her husband, John Okon,  who was a personal cook to Dankwanbo.
Okon alleged that her husband died as a result of injuries sustained due to beatings and torture by men of SARS.

She further stated that he was in custody of the men of SARS headed by one SP Jummai of the anti-crime department, Kaduna.Okon said the problem started after a burglary at the Kaduna residence of Dankwanbo were the deceased was living with his family.

She narrated: “The deceased who lived in the boys quarters of the governor’s private residence in Kaduna woke up on Nov. 8, 2018 to discover that the house had been burgled and four theatre TV cinema sets carted away by unknown persons.

“The deceased, his wife and other domestic staff reported the case at the Kabala Costain Police Station, where they were all arrested. “They were subsequently transferred to the state Police Headquarters on Friday November 9, 2018 for further investigation.

“My husband fell sick and died on November 13 as he was being rushed to Barau Diko General Hospital, Kaduna for medical attention.” Counsel to the petitioner, Gloria Balkson, brought a pathologist, Dr Godwin Ayuba, who performed autopsy on the deceased.Ayuba led by Balkson narrated their finding to the panel.

He said: “He died as a result of multiple traumas; break down of blood due to infection or drug and so much bile stain, signifying leakages in the gall bladder. “His stomach had undigested peppery liquid food and the small intestine was ballooned at intervals.” When cross examined by counsel to the police, Taiwo Malik, the pathologist said the coroner from the police paid for the autopsy and was the one who asked for the autopsy.
He said further that he doesn’t know why the police pathologist was not invited to the sitting.

Dr Iheanyichukwu Ogbonna, obstetrician and gynecologist who served as an observer to the autopsy told the panel that the gall bladder was ruptured obviously traumatised. He stated further that the bile stained the entire intestine green, showing that no enough food was in the stomach.
When the wife of the deceased was led in evidence by her counsel, she said that she identified one Insp. Baba Yakubu as the police officer who dragged her late husband and tortured him.

She said: “They did not allow him to drink water or eat food.” The panel led by Tony Ojukwu asked Yakubu to respond to the allegation but he denied dragging the deceased. He said: “I am not working at the counter, my office is upstairs and the ones responsible for feeding suspects are those working at the counter.’’

The News Agency of Nigeria reports that the panel was set up by the Federal Government to investigate the allegations of human rights abuses by the men of Special Anti-Robbery Squad.
The panel is to make useful recommendations to government on the way forward.