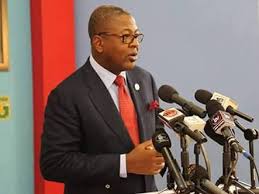 The Senate has passed the Nigerian Tourism Development Corporation (NTDC) (Repeal renactment) Bill 2017 into law. The law, which was initiated to reposition NTDC, is awaiting President Muhammadu Buhari‘s assent. NTDC Director-General Folorunso Coker speaks with Assistant Editor (Arts) OZOLUA UHAKHEME on his expectations of the law and its relevance to global tourism objectives.

Nigeria Tourism Development Corporation (NTDC) Director-General, Mr. Folorunso Coker, has described the new NTDC bill awaiting President Buhari’s assent as the needed legal framework to grow the nation’s tourism potential. He said the new bill when passed into law will prompt a financial framework that allows the agency to operate as a business entity capable of generating huge revenues for the economy.

He likened the NTDC’s legal framework to the required foundation (the financial framework inclusive) laid in the communication, banking, oil and gas sectors, which resulted in their huge revenue returns.

He lamented that most tourism operators are now unable to access loans from the banks because tourism does not generate individual returns, which may allow it to withstand 25 per cent interest rate. This, according to him, is because tourism is not seen as a serious business.

Coker, who spoke in Lagos, said it is not profitable for the corporation to sit on the fence as a regulatory body and being unable to behave like a private sector concern in terms of understanding people’s needs.

He noted that since he assumed office in 2017, he has refrained from performing assignments on the pages of newspapers, but focused carefully on building blocks on a foundation that will allow subsequent development plans.

“In tourism, the legal framework for the commercialisation of tourism world best practices was not there. The law was really old.  The law has also been handcuffed by a Supreme Court order, so it was not a law that could allow tourism industry generate the kind of revenues the oil and communication industries have. That is the significance.

“With the legal framework required for the financial framework to sit on, with the global best practices locked into that, you can see that the lip services that tourism was paid can not achieve much, except the legal frame work is in place. For instance, tourism operators cannot conveniently borrow from the bank because tourism is not seen as a business, because there is no legal framework that supports it. Now, hopefully that will change as soon as the bill is passed into law,” he said.

According to Coker, despite these challenges, tourism has been very lucky with the on-going infrastructural development (roads, rail, security, power) embarked upon by Buhari’s administration across the country. He added that for every naira President Buhari has spent in making the life of every Nigerian better is what tourism requires.

He commended Nigeria for investing in agriculture, manufacturing, power, rail, road and other infrastructure, noting that the best off taker for these industries is tourism because it consumes almost all the products. “Tourism will create more intense demand for agricultural products, manufacturing, power, etc. and ‘we will see good value for the investment,” he said.

“Every naira spent benefits tourism. Even though tourism is angling for more funds for specific tourism projects, a lot of things are being done that benefit tourism as it benefits the larger society. Also, we have started the process of Tourism Satellite Account, (TSA), which allows you to measure what is going right or wrong,” he said.

On the journey so far, Coker said: “This is not something one would particularly want to publicise. But, in terms of NTDC, I met a lot of historical debts. And with limited funding it was important that I discharge some of the historical debts, but I also kept the organisation alive. The financial engineering was required to balance that historical debts that I did not create, but keep people running and paid off little by little, without fear or favour.” The implementation of that is what attracted the initial protest by staff of the organisation. “If you have very limited resources, you must close loopholes. And when you do that, there will be crisis. In terms of human capital, our focus has been digital. I am glad that the staff have embraced the digital training because the future is digital. Today, the richest companies in the world are not in the oil and gas sector, but digital, where Apple, Google etc. are leaders. Everybody’s life in the future will be disrupted by this new technology.”

“Within the NTDC’s Tour Nigeria and Nigeria Flavour the digital marketing brands we created, we can generate in-bound tourists from the Diaspora as witnessed in Ghana last month, which might have been subsidised by that government.  By virtue of our population, we have the strength to bring good number of Diaspora to Nigeria. We are pleading for financial institutions to make funding of tourism cheaper for tourism stakeholders because tourism does not generate individual returns yet that allows it to stand 25 per cent interest rate.

“If you go to Dubai or London, most of the tourism facilities are domestic first and foremost, but expanded to accommodate international plugging.

“In fact, Nigeria offers value for money when compared to other cities. As long as we have good value for money, we will get the international tourists. All we need to do is get our fundamentals right. That is what I am trying to do.”

“This is to aggregate the taxes that are due to tourism and allow the identification of tourism tax that will go into the development fund, which will be managed by a board. For instance, if NTDC wants to build a small motel in Gurara Fall, we need to bring a seed money as counterpart fund to execute such project. This is to encourage the host state.

Use of data for development

“We have a very good relationship with National Bureau of Statistics (NBS). The Bureau examined the performances of tourism related industry in the economy and declared that tourism was responsible for 34 per cent of the country’s GDP and 20 per cent employment generation. These figures are incredibly encouraging to me.

“It is good Nigeria is investing in agriculture, manufacturing, power, rail, road and other infrastructure. The best off taker for these industries is tourism because it consumes almost all the products. Tourism will create more intense demand for agricultural products, power, etc and we will see good value for the investment. By investment, I mean the seed money we need to put into the sector to encourage state and private operators. In fact, the bill is not punitive to anybody as it is more by collaboration than enforcement.”

“Hotel standardisation and grading across the world are done by countries and not by states. We are going through the motion with UNWTO to put ourselves in a position to grade all our hotels so that we can deliver value for money. We cannot force any state to subscribe to standardisation of hotels because it is in the state interest to subscribe. Will anyone wish to have many standards or one standard that is uniform across board?

Expectations from the law

“I see a future where NTDC is a technological company in the sphere of tourism regulation just like UBER in the sphere of transportation, Inter-switch in the provision of switching system in the banking sector. That’s is my vision for NTDC.”