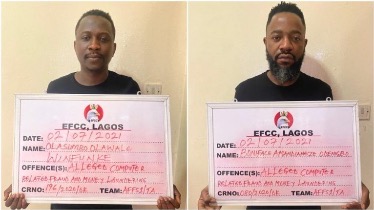 The two suspects, who own popular hangout, Buzz Barr, located on Adetokunbo Ademola Street, Victoria Island, Lagos, were arrested recently at No 2A and 2B Oniru Estate, Lagos where they both live.

According to reports, a large team of EFCC operatives picked up both Armani and Sunbo without warning on Tuesday, June 29, 2021 at about 3pm.

They are also said to be held due to their involvement in an alleged multimillionaire fraud in the United States based on a request by the FBI.

The operatives, who came prepared in the event of any resistance, also raided the duo’s garages and removed every single luxury car, probably to be used as exhibits when they go on trial.

Further investigations have also established nexus with other associates who are suspected to be into computer-related fraud.

It was gathered that they are facing a likely extradition to the United States.

However, they have been granted stringent bail conditions which they have been unable to fulfill as the investigation into the alleged crime continues.

They will be charged to court soon.

The suspects run Buzz Barr, one of Lagos’ biggest nightclubs and an exclusive premium lounge, which opened for business in December 2017.

The hangout is known for its casual and intimate lounge setting and famous for its strip clubs and exotic dancers.

It was learnt that Armani and Sunbo, who are best of friends, are fingered in a $35 million dollar fraud and it is alleged that one of their partners in the United States gave them out to the FBI.

Unknown to them, they had been under surveillance for a while, with EFCC operatives happily documenting their lavish lifestyle which they flaunted on social media.

Unlike his easy going and quiet partner, Sunbo, who is married to Tania Omotayo, a fashion designer and an ex-girlfriend of music star, Wizkid, is on the loud side.

He is one of the real big spenders in the Lekki area of Lagos and a darling to male clothiers as he doesn’t spare anything when it comes to updating his wardrobe with designer clothes.

In the last two years, the EFCC has arrested a number of nightclub owners in Lagos and major Nigerian cities over allegations of fraud and internet scam.

Communique Issued At The Conclusion Of The Meeting Of The Governors Of Southern Nigeria At The Lagos State Government House, Ikeja, Lagos State, On Monday, 5th July, 2021 Nigeria.