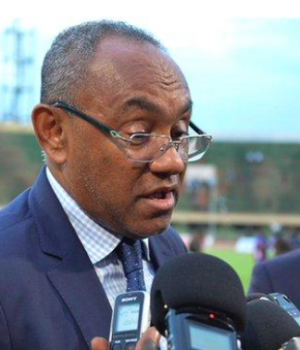 Ahmad Ahmad, president of Confederation of African Football (CAF), has been arrested in Paris, capital of France.

According to Jeune Afrique, Ahmad was picked up around 8:30 am at the Berri Hotel in Paris, where he was staying ahead of the FIFA congress.

It said the arrest may be related to the alleged misappropriation and corruption involving French company, Tactical Steel.

Before he was fired in April, Amr Fahmy, former secretary-general of the confederation, had accused Ahmad of corruption.

Fahmy in a document sent to FIFA investigations committee accused the president of costing CAF an additional $830,000 because he ordered equipment through Tactical Steel.

Ahmad had defended himself and gave the assurance that all decisions were transparent.

Sabine Seillier, president of Tactical Steel, however, insisted that her company won the contract on a transparent basis.

She said her company was the only one that could guarantee delivery of the equipment sought in a tight timeframe of three weeks.

When she was questioned if Tactical Steel was been involved in kickbacks to Ahmad or his associates, Seillier replied: “Absolutely not. Tactical Steel complies with French law.”

There are reports that Seiller’s husband is a friend of an acquaintance of Ahmad.

Following his arrest, Amaju Pinnick, the vice-president, will assume his duties for a transitional period of four months before convening an elective special assembly.