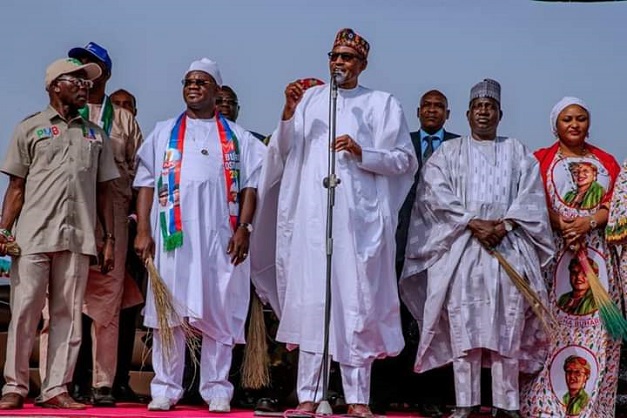 The head of publicity of the APC presidential campaign council in Kogi State, Onogwu Muhammed Galacticus has described the mammoth crowd that graced Wednesday presidential rally of the All Progressives Congress (APC) in Lokoja as unprecedented.

Speaking to newsmen after the action-packed campaign, Onogwu said the turnout of supporters at the rally makes the recent rally of the Peoples Democratic Party (PDP) presidential candidate, Alhaji Atiku Abubakar look like a child’s play.

He commended the Governor Yahaya Bello for providing quality leadership in the state which resulted in the overwhelming support the All Progressives Congress (APC) in enjoying in Kogi state.

The APC presidential rally shook the state as unprecedented mammoth crowd welcomed President Muhammadu Buhari to the state for his campaign.

The 25,000 sitting capacity stadium was filled to the brim, while the track and field space as well as the stadium surroundings were flooded with party faithfuls, supporters and sympathizers of the President.

Speaking at the rally, President Muhammedu Buhari said it will be a great mistake to return PDP candidates at any level back to government.

Buhari thanked the crowd in Lokoja, Kogi State capital for coming out enmasse in such a short notice. He urged the people to consider his performances in spite of the scarce resources to vote him for second term.

He also berated the previous administrations for wasting $16 billion on power without commensurable outcomes.

The Director General, of the APC Presidential Campaign Council, Rotimi Amaechi said the general election is between the looters and the looted; saying the PDP are the looters while the populace are the ones being looted.

“PDP are hungry and desperate to come back to power. They want to get into power so that they can find a means into looting for another four years. If you don’t reject them they will come back and steal. PDP can only thrive in corruption.”

The governor promised the president that he will not only win the state but will win in all the polling units in the state.