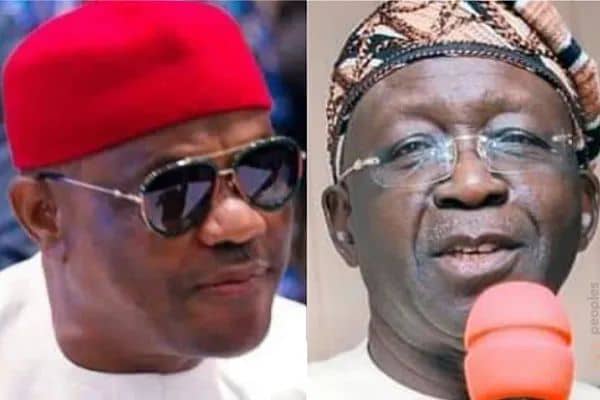 Rivers Governor Nyesom Wike, on Saturday threatened a showdown over the suspension of some of his political allies in the Peoples Democratic Party (PDP) for alleged anti-party activities.
He vowed to challenge, in particular, the dissolution of the Ekiti State Executive Council of the party believed to be loyal to a former governor of the state, Mr. Ayodele Fayose.
Fayose is an ally of the Rivers State governor.
Wike told the National Working Committee of the Peoples Democratic Party (PDP) that its decision to suspend his supporters was off course.
Former governor of Enugu State, Senator Chimaroke Nnamani who was similarly axed in the suspension gale, also protested the action against him.
He said he was neither told his offence nor given an opportunity to defend himself before a disciplinary action was taken against him.
Wike and his colleagues in the G-5 (Governors Seyi Makinde of Oyo, Samuel Ortom of Benue, Ifeanyi Ugwuanyi of Enugu and Okezie Ikpeazu of Abia) are opposed to PDP’s ceding of its presidential ticket and national chairmanship of the party to the North.
He dared Ayu to suspend him or any of his colleagues in the G-5.
He said: “Let me also use this opportunity to say to Iyorchia Ayu and his team, your dissolving Ekiti State Exco will not help you in any way. Your suspending people will not help you in any way.
“The battle line has been fully drawn. As I speak to you, we will do everything legally possible to challenge any decision we know is illegal.
“So, don’t think you can threaten people by saying so, so persons have been suspended. Rubbish! Complete rubbish! We are above that level that you think you can threaten anybody; intimidate anybody with whatever illegal decision you have taken.”
Continuing, Wike said: “We are waiting for you to announce my own and any other of my friends. Like I have said, when a man says you will not sleep, he too, will he sleep? Will Ayu sleep? Will those his cohorts sleep?
“So don’t worry, we have the capacity to pay back. We have the capacity to tell you that enough is enough.
“You are doing what will give you more headaches as far as this election is concerned. We are watching and we are waiting for you to announce more of my friends.
“When a man says you will not sleep, will he sleep too? Will Ayu sleep?”

Tinubu to religious leaders: champion the cause of justice, fairness

Don’t allow PDP back to power, Tinubu charges Jigawa people to vote APC all the way in next elections