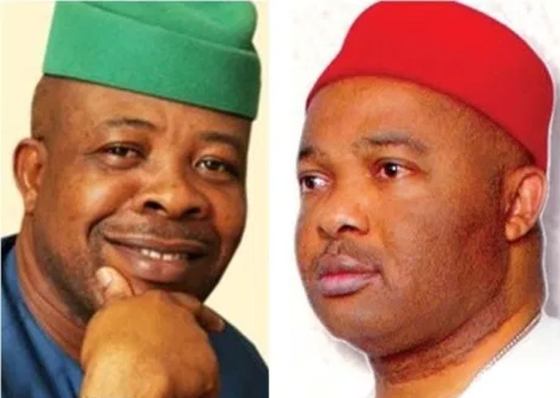 The Supreme Court on Tuesday nullified the election of Emeka Ihedioha as the Governor of Imo State.

A seven-man panel of the apex court led by the Chief Justice of Nigeria, Justice Tanko Muhammad, unanimously declared Hope Uzodinma of the All Progressives Congress as winner of the March 9, 2019 governorship election and the validly elected governor of the state.

There was a lull in the courtroom as the apex court handed down the judgment. Ihedioha’s lawyers and supporters were visibly shocked after the apex court delivered the judgment at 6:20pm during an eight-hour sitting with two intermittent breaks.

More than 10 minutes after the apex court panel members departed the courtroom, Ihedioha’s lawyers and supporters were unable to move as they remained stuck to the same position

They joined others, who could not gain entry into the courtroom, to celebrate the court’s pronouncement. Some of them appeared to be making calls informing their supporters back home of their court victory.

She also directed that Uzodinma, who came distant fourth in the results of the election declared on March 11, 2019 be immediately sworn in as the Governor of Imo State.

Justice Kekere-Ekun dismissed the All Progressives Grand Alliance’s Ifeanyi Ararume’s appeal for being academic following the court’s declaration of Uzodinma as the winner of the election.

In upholding Uzodinma’s appeal on Tuesday, the Supreme Court agreed with him that the votes polled in 388 out of the 3,523 polling units were excluded in the final results declared by the Independent National Electoral Commission in the states, on March 11, 2019.

Justice Kekere-Ekun ruled that with the addition of the excluded votes to the earlier declared final results, Uzodinma polled the highest lawful votes with the required spread of votes in the state.

She set aside the judgments of both the Imo State Governorship Election Petitions Tribunal and the Court of Appeal which had both affirmed Ihedioha’s election.

She stated, “The lower court misunderstood the case of the appellants,” she ruled, adding that “the case was not a case of exclusion from the election but exclusion of votes from final results.”

She explained that the lower courts were wrong to have rejected the results of the 388 polling units on the grounds that they were not tendered before the tribunal by the proper person.

The results were said to have been tendered by the 54th petitioners’ witness.

Ihedioha had argued that the Supreme Court had earlier in its judgment delivered on December 20, 2019 declared that Uche Nwosu was the candidate of both the APC and the Action Alliance and on the basis of that declared the nomination of Nwosu for the March 2019 election as null and void.

His lawyers argued that the apex court’s judgment implied that Uzodinma was not the APC’s candidate in the election.

But addressing this argument in the Tuesday’s judgment, Justice Kekere-Ekun held that the issue of nomination was a pre-election issue that could not be raised in a post-election litigation.

As the consequence of the findings, she ordered, “The judgment of the lower court which declared  the first appellant as the winner with the majority of lawful votes is hereby set aside.

“It is hereby declared that votes due to the appellants – Hope Uzodinma and the All Progressives Congress – were wrongfully excluded.

“It is ordered that the votes unlawfully excluded should be added.

“The first respondent (Ihedioha) was not duly elected by the majority of lawful votes and his return as the winner of the election is hereby declared null and void.

“The first appellant (Uzodinma) polled the majority of the Imo State governorship election held on March 9, 2019 and got the required spread across the state.

“The first appellant is the winner of the governorship election held on March 9, 2019 in Imo State.”

Meanwhile, Action Alliance’s governorship candidate in the March 9, 2019 governorship election in Imo State, Uche Nwosu, on Tuesday, withdrew the appeal he filed against the election of Ihedioha.

Nwosu is a son-in-law to the immediate-past governor of Imo State, Rochas Okorocha, who was elected to the Senate on the platform of the APC in the 2019 general election in the state.

On Tuesday, Nwosu’s lawyer, Mr. Solomon Umoh (SAN), told the seven-man panel of the Supreme Court that the decision to withdraw the appeal challenging the outcome of the last governorship election in Imo State was based on the judgment of the apex court delivered on December 20, 2019.

The referenced judgment of the Supreme Court was on a case marked SC. 1384/2019 , which had declared that Nwosu was not validly nominated as a candidate of the AA to participate in the March 9, 2019 governorship poll,  thus lacked the locus standi to file any case in connection with the election.

Besides Ihedioha’s supporters, the nation’s main opposition party, the PDP, also expressed surprise over the judgment.

The PDP National Publicity Secretary, Mr Kola Ologbondiyan, in a statement, described the judgment as yet another very sad commentary on the nation’s democratic order.

He said, “The party finds it difficult to understand how Senator Hope Uzodinma of the All Progressives Congress, who came 4th in the March 9, 2019 governorship election, with just  96,458 votes, will suddenly, by the token of the judgment of the Supreme Court, defeat Chief Emeka Ihedioha/PDP who scored 276,404 votes.

“In fact, the PDP and indeed, most Nigerians are still at a loss as to understand the basis upon which the Supreme Court arrived at its decision.

“The party says it is lamentable that the destiny of the people of Imo state is being taken from the governor they chose and voted for and handed over to individuals and a political party that do not have their blessing and mandate and which they rejected at the election.”

My stolen mandate has been recovered – Imo governor elect

But  Uzodinma said that his stolen mandate had been recovered by the Supreme Court.

Uzodinma, who spoke to our correspondent through his spokesperson, Declan Emelumba, shortly after the apex court declared him the duly elected governor of the state, said that the court had demonstrated bravery.

He said “The Supreme Court has declared Senator Hope Uzodinma as the duly elected governor of Imo state. The beautiful thing is that our stolen mandate has been recovered.

There were mixed feelings in  Owerri, the Imo State capital on Tuesday following the Supreme Court judgment that declared  Uzodinma as the duly elected governor of the state.

While people celebrated the apex court’s verdict, others described it as very shocking.

The state APC Publicity Secretary, Enyinnaya Onuegbu, in an interview with one of our correspondents,  said that the party was happy that its candidate had been returned by the Supreme Court.

He said,  “We are jubilating, our candidate, Senator Hope Uzodinma is now the governor of Imo State. This is great news for us.”

A member of the Peoples Democratic Party, Ikenna Eme, described the verdict as shocking. According to him, the APC used the court to hijack the state.

The entrance gate to Imo State Government House in Owerri, the state capital, was locked immediately news filtered in that  Uzodinma had been returned as the duly elected governor of the state by the Supreme Court.

The PUNCH correspondent, who visited the entrance gate heard security saying that there was an order for them to restrict movement in and out of the Government House.

But the APC members thronged the party  Secretariat located at Owerri – Okigwe Road in Owerri to celebrate the emergence of Uzodinma as the new governor of the state.

Our correspondent saw the APC supporters dancing from the roundabout at Government House towards Rock View Hotel avenue.

I am ready to support Uzodinma–Okorocha

The Deputy President of the Senate, Ovie Omo-Agege, also congratulated  Uzodinma on his victory at the Supreme Court.

Omo-Agege, according to a statement by his media aide,  Yomi Odunuga,  on Tuesday, described the development as victory for democracy.

The Ogun State Governor, Dapo Abiodun,   in a statement by his Chief Press Secretary, Kunle Somorin,  lauded the Supreme Court for its courageous judgment.

Also, the President of the Senate, Ahmad Lawan, in a statement by his media aide, Ola Awoniyi, congratulated Uzodinma.

“This is a victory for democracy, the rule of law, the All Progressives Congress and the good people of Imo State,” he stated.

The APC, in a statement by its National Publicity Secretary, Lanre Issa-Onilu,  asked INEC to immediately issue certificate of return to Uzodinma.

The statement stated, “Even as we are still wondering why we lost elections we clearly won in Zamfara State at the Supreme Court and how the same court ruled our party out of the electoral race in Rivers State, we have never, as a political party, lost faith in the judiciary.

“We salute Senator Hope Uzodinma, our supporters and members for their temperance displayed in the aftermath of the blatant rigging of the Imo governorship election.

“We chose to focus on the judicial route to reclaim the party’s mandate. We are confident that our other stolen electoral mandates will be restored by the courts.

“The APC calls on all Imo State APC stakeholders to come together in support of Senator Uzodinma to ensure the success of the party’s Next Level agenda and to democratically entrench the APC in the state and the entire South-East.”

The statement signed by his Senior Special Assistant on Media and Publicity, Mr Garba Shehu, read, “President  Muhammadu Buhari has commended the Supreme Court for their courage and perseverance in the decision to return a well-deserved victory to the All Progressives Congress and its candidate in Imo State governorship contest, Senator Hope Uzodinma.”

Alaafin: Kings who indulge in clubbing, drinking do not deserve respect