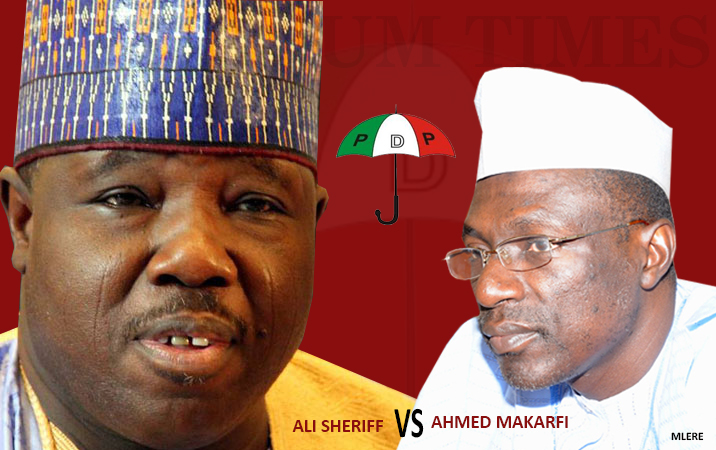 A coalition of youth groups within the opposition Peoples Democratic Party, PDP, has given leaders of the party seven days to resolve all pending issues relating to the ongoing crisis in the party or they would takeover.

Briefing journalists at the end of their meeting Tuesday, at the Wadata Plaza National Secretariat of the party, the chairman of the group, Aderemi Olusegun, said they were saddened by the “unabated internal wrangling” besetting the party.

He said as concerned youth, they found it necessary to come together to take a firm position in the interest of PDP members nationwide.

Mr. Aderemi said the youth had waited enough for the party’s leaders since the Port Harcourt convention to amicably resolve the lingering problem of leadership.

“We are giving the leadership of the party (which includes the BOT, Governors’ Forum, warring groups and other stakeholders) a 7-day ultimatum to resolve this intractable but avoidable rancour.

“However, if this is not resolved, we shall be compelled to mobilize all concerned youths nationwide to take over the affairs of the party, as we have started putting in place an effective structure to take over the party secretariat,” he said.

Mr. Aderemi said the PDP as a party is bigger than individuals and groups, adding that they youth had resolved to “henceforth not tolerate anyone to take the party for a ride”.

“We are therefore demanding the immediate withdrawal of all pending litigations in the court of law, so that we can amicably resolve all issues,” he said

The PDP youth also said it was sad for the leaders of the party not to consider the effect of their actions on the forthcoming governorship elections in Edo and Ondo States, which, they said, were likely to affect the fortune of the party.

“Our party members world over are seriously disillusioned and unhappy.

“We have therefore constituted an 11-man committee to liaise with all the parties concerned and stakeholders so as a matter of urgency resolve all disagreements in our party.

“We shall be making further demands known to all the stakeholders in order to reposition our party as a viable alternative for all Nigerians,” the youth said.

The PDP has been embroiled in crisis since May 21 when different factions emerged at two simultaneous national conventions in Port Harcourt, Rivers State, and Abuja.

However, PDP governors and the BoT, went ahead to carry out the convention and announced the sack of Mr. Sheriff and all members of his working committee.

The convention also announced the composition of a caretaker committee to be headed by former governor of Kaduna state, Ahmed Makarfi.

At the Abuja convention, former deputy Senate President, Ibrahim Mantu, was announced the new chairman of the party.

The BoT and the Mantu group eventually recognized the leadership of Mr.Makarfi, but, Mr. Sheriff insists he remains the chairman of the party.

While Mr. Makarfi formally resumed duties last week, Mr. Sheriff on Monday led hundreds of his supporters and invaded the national secretariat of the party saying a court in Lagos had already confirmed him as chairman until 2018.

17 witnesses to testify against Fani-Kayode, Usman