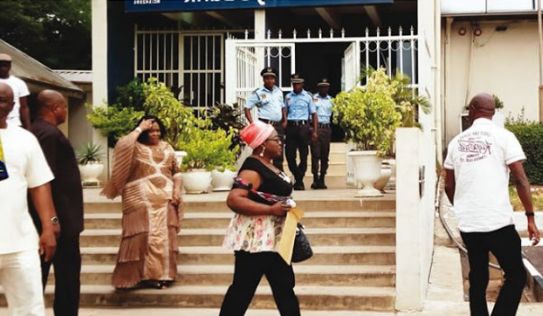 The Economic and Financial Crimes Commission has barred Patience Jonathan, the wife of former President Goodluck Jonathan, from withdrawing money from a $5.9m account with Skye Bank, which was ordered to be unfrozen by a court last week.

This is just as the EFCC has begun fresh move to ensure that a separate $15m, which was traced to Patience, is permanently forfeited to the Federal Government.

It was learnt, on Monday, that Mrs. Jonathan was barred from operating the $5m account after a Federal High Court, sitting in Ikoyi, Lagos, ordered that the restriction on the account be lifted.

EFCC was able to obtain a stay of execution, a court order obtained for the purpose of suspending the execution of another court judgment.

A source told Punch that, “Shortly after the judge ordered that the account be unfrozen, the EFCC quickly obtained a stay of execution in order to prevent her from having access to the money.

“The EFCC communicated with the relevant authorities at Skye Bank that it was important that she wasn’t allowed to withdraw the money or else, the whole purpose of the freezing would have been defeated.”

In an interview with Punch yesterday, Mrs. Jonathan’s lawyer, Adedipe, admitted that the bank had not allowed his client to withdraw money from the account, but disagreed with the notion that the account had been frozen again.

He explained that Skye Bank, rather than comply with the court’s order unfreezing the accounts, was banking on the fact that the EFCC had gone on appeal to challenge the unfreezing of the account and had also filed a stay of execution.

Recall that the EFCC had, in June last year, arrested four domestic servants, including a driver and a houseboy, who allegedly operated bank accounts belonging to Patience.