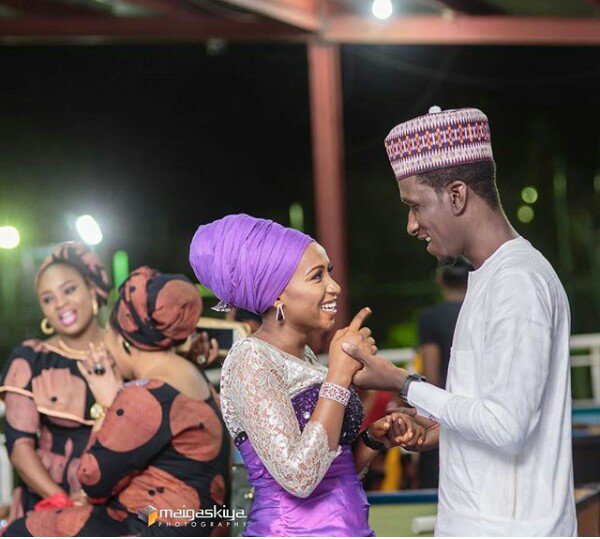 The family of Bilyaminu Bello, the son of ex-PDP chairman, Haliru Bello, who was recently stabbed to death by his wife, Maryam Sanda, have finally broken their silence on the very sad incident that occured on Sunday, November 19th.

“So far, the family is grieving. Maryam’s family have come to pay their condolence. The mother has come but what is more painful is the fact that Maryam does not look remorseful for what she did at all. I just pray one day, she finds it in her heart to honestly say what it is that made her do what she did. As a family, we are looking at the authority to do what is right, to let justice prevail. This is an example to others. The way this case is treated will determine how we move forward…Bilyamin was not just my older brother but best friend.” he said

A friend of the deceased, Hakeem Ali, who also spoke at the night of tribute, said Bilyaminu was a prisoner in his matrmonial home. He denied allegations that Bilyaminu was a serial cheater.

‘My friend was being held a prisoner in his own home. He couldn’t leave the house in the sense that it was an ongoing thing; the abuse went on for a while. For me there is a difference between love and when somebody is being obsessive. People tend not to understand the difference between love and obsession. It wasn’t the best marriage and I believe either of them could have just walked away. It’s easier to sit down in that sorrow and think you can change things, or that if I can’t have him, no one will. I don’t consider it love. I can’t speak on his behalf. I can’t speak on his personal issue, he is a good friend and he is gone. He was that one guy that the minute we step out, we will be like, it is time for you to go home, your wife is about to call, after hanging out for as little as an hour or even 30 minutes. Even in the afternoon because she always calls. So we formed the habit of going to see him at home. The situation with the law, there are a lot of speculations right now on social media but if Nigeria should excuse people for murder just because they have a child, then if I am a murderer, then I will keep on having babies every week, that is not an excuse, for me. If somebody has committed a murder, either intentionally or by mistake, she should not be allowed to even see her baby because you don’t even know her state of mind. I don’t understand the system. A conversation has to begin on domestic violence against men as well because it’s becoming recurrent. If it is a case of murder by mistake then there is a price to pay of which a family can forgive but only God gives life and only God can take it. So, if you take a life, then your life should be taken. It is that simple. If the evidence shows it is a murder, then there is no excuse. It should be a case of an eye for an eye. It is that simple.”

Another friend of the deceased, Jemila Shehu, who was also at the tribute night, suggested that Maryam might have bipolar disorder or Post Traumatic Stress Disorder PTSD

‘Our pain is that Maryam Sanda is not remorseful’ family of Bilyaminu Bello Speaks
”I have no idea. I was not in her mind. I don’t know what she was thinking. All I know is that they both loved each other. There was love there, only God knows. It beats my imagination and I don’t want to think about it or give any excuse as a Muslim. He is gone but I don’t know what she was thinking. I don’t know what to think about her. For me, she should be punished. She committed murder. So, she should serve the punishment fully. This happened to someone that was loved by a lot of people. He was kind, quiet and people knew them to be in love. So, it beats everybody’s imagination. Domestic violence should be treated. People should relax, love is not by force. Obsession is a disease. There are a lot of people in Nigeria that are sick but people don’t know because you think that if you go to the therapist, they look down on you or think you are crazy but there are a lot of PTSD, bipolar patients and they live among us. Maybe she flipped, maybe it was a psychotic break or maybe she planned it.”