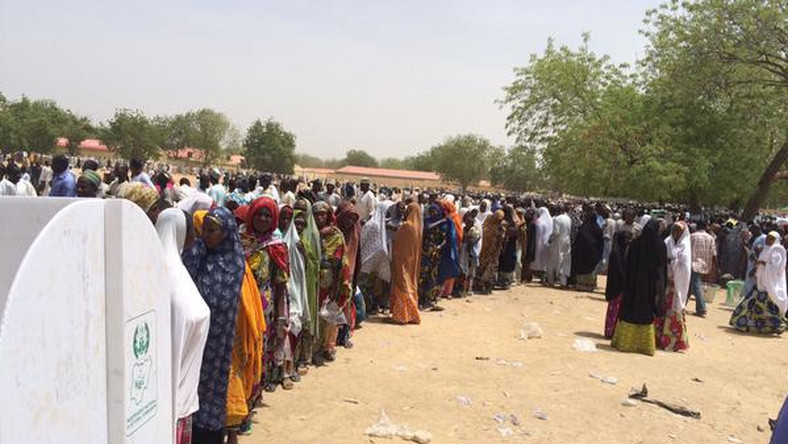 A total of 409,833 internally displaced persons living in camps in Borno State are set to cast their votes in 10 special voting centres in the 2019 general elections.

This was disclosed by the state’s Resident Electoral Commissioner (REC), Ibrahim Mohammed, while speaking in Maiduguri, the state capital, on Wednesday, February 6, 2019.

He told Daily Trust that the IDPs are those in the Voters Register of the Independent National Electoral Commission (INEC) who’ll be privileged to vote in eight local government areas in the state.

He disclosed that 45,707 IDPs from Abadam will vote at the Borno College of Legal and Islamic Studies (BOCOLIS) in Maiduguri, while 36,669 from Guzamala will vote at a centre in Monguno.

61,802 IDPs from Marge will be able to vote at Government Girls Secondary School, Monguno, and another 52,395 IDPs from Dikwa will vote at Central Primary School Dikwa, while 64,488 IDPs will vote at Ngala International School and Nigeria Arabic Village, Ngala.

60,678 IDPs from Kukawa will also be able to vote at Teachers Village IDPs Camp, Maiduguri Metropolis, while 44,705 IDPs from Mobbar will vote at Central Primary School Damasak and Zanna Umarti Ajari Primary School.

The remaining 43,389 IDPs from Kala-Balge will vote at Gamboru Primary School.

Most of the IDPs have been displaced from their local communities due to Boko Haram, a terrorist group whose insurgency has displaced over 2 million people in nearly 10 years.

With Borno being the group’s dominant area of operation, Boko Haram terrorists have also killed over 27,000 people and forced a six-week postponement of the 2015 general elections.

While addressing the fact that some of the IDPs were displaced from other states, Mohammed disclosed that non-indigenes will only participate in the presidential election.