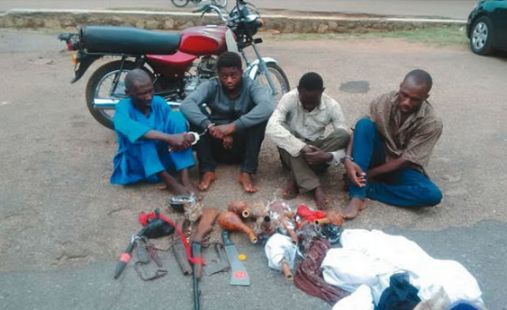 Four deadly suspects have been arrested by Oyo state Police Command for killing a businessman, Akintoye Oyeyemi, and removing his heart for ritual purposes.

Commissioner of Police, Abiodun Odude, while parading the suspects at the state police command, Ibadan, said two of the suspects, Gbenga Babalade, 40, and Tunde Jimoh, 37, killed the victim in a cashew plantation farm in Ajase-Ipo, Kwara State, believing that he had N10m with him.

He said after killing him, they found only N100,000 with him and decided to remove his heart and other body parts in order to do money ritual. Both had before the killing, contacted an acclaimed Alfa, Ahmed Olatunji 42, through a herbalist, Agboola Abubakar, 65, who told them that if they could get a human heart, he would prepare a potion with it that would make them rich.

He said, “To carry out their evil plan, Jimoh and Babalade under the pretext of doing business on February 24, 2017, lured the victim and robbed him of N100,000 before killing him with a gun. They removed his heart, severed his head and wrists for ritual.

“After the victim’s wife reported that her husband was missing at Atiba police station in Oyo, the anti-kidnapping squad of the command investigated his disappearance and during investigation, Abubakar was arrested, leading to three more arrests.”

The victim was said to be discussing N10m deal with a cashew trader, Olayinka Babalade, who is one of the suspect’s brothers when his alleged murderers heard about it and laid an ambush for him.

Babalade said, “I helped my brother in cashew business. The person we killed was a partner to my brother. He came to discuss a deal with him and I heard about it. The deceased said he would bring N10m when he returned to complete the deal. I conspired with my friend who was around to rob him at Ajase-Ipo.

“We picked him up at a location with a motorcycle and took him to a plantation. We thought he would have all the N10m but we only found N100,000 on him. Then my friend shot him, saying that he had to do it because the victim had recognised us. We later decided to remove his heart for the money ritual which was our initial plan. When we got to the Alfa, he said he could not do it again for us. He chased us away and told us to throw away the head and pour alcohol on the other body parts.”

Jimoh said he introduced Babalade to the herbalist, Agboola, and that he had earlier taken money from Babalade to help him find a human heart for the ritual but failed to get one. He admitted killing the victim with a gun and helped remove his heart and other body parts.