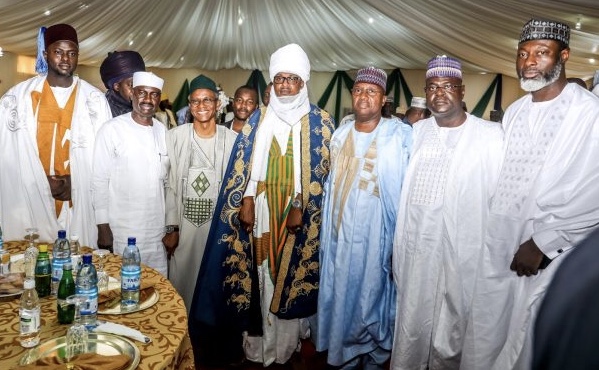 Yola, the capital of Adamawa State was agog on Saturday as the Vice President, Professor Yemi Osinbajo (SAN), Kaduna State Governor, Mallam Nasir El-Rufai, amongst many other dignitaries visited the State capital to witness the turbaning of the new Dujima Adamawa, Alhaji Musa Halilu Ahmed.

Lamido Adamawa, in his address, urged the newly coronated Dujima Adamawa to discharge his duties with the fear of God and see the new position as a challenge to do more in helping humanity.

According to him, there is no better period to receive the title than now, stressing that it is a position that was highly reserved for philanthropists who have demonstrated exceptional leadership in civic and charitable responsibility.

Describing his new traditional title as the will of Allah, the Dujima Adamawa urged residents and other traditional rulers in the state to join hands with him to move the state forward.

He also thanked the Lamido Adamawa for recognising his giant strides in the society and conferring on him, one of the highest traditional titles in the land.

According to him, the added feat is a call to do more in promoting social good and investing more in the people of Adamwa State and the nation as a whole.

Halilu, serves as Chairman and sits on the Board of numerous companies with interests in Construction, Real estate, Energy, Agriculture, Technology, Supply chain Management and Venture capital.

As tradition demands, the Dujima Adamawa rode on a horse from the palace to his residence, where he was hosted by Governor Bindow at the Government House in Yola, the Adamawa State capital.

Minutes after, the newly turbaned Dujima Adamawa was convoyed to his residence where several well-wishers and guests were waiting to felicitate with him.