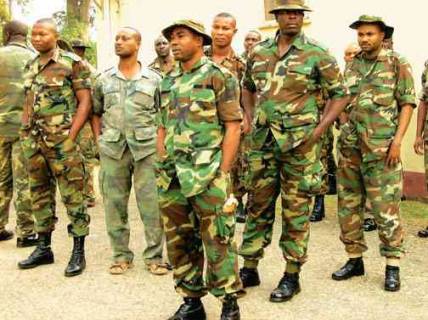 Two attacks on Nigerian soldiers attached to Multinational Joint Task Force between November 5 and 6 left at least one soldier killed and 16 others missing, military sources said on Wednesday.

At least five soldiers were also wounded during the attack on a military camp in Kukawa village on November 5 and an improvised explosive device that went off on a moving military truck in Mallam Fatori on November 6. Both communities are in the northern fringes of Borno State, near the border with Niger Republic.

In the November 5 attack, the Boko Haram insurgents tried to overrun a military checkpoint manned by 101 Special Forces and 157 Battalion with five gun trucks around 5:40 p.m.

They managed to dislodge the troops and burned two armoured personnel carriers that were already in disrepair, and made away with one anti-aircraft gun and one light machine gun, military sources said.

The sources said the Boko Haram terrorists then proceeded to an abandoned secondary school nearby, where the MNJTF soldiers had been using as their base, and burned its administrative office and kitchen down.

The attack left one soldier wounded while 16 others were missing in action as of Wednesday night, sources said.

The insurgents fled after air support arrived. The Nigerian Air Force personnel pursued the terrorists with an attack helicopter, forcing them to withdraw into their enclaves.

Military sources said the Air Force is currently conducting an assessment of the damage, and would forward final findings on potential casualties to command headquarters afterwards.

The attack in Mallam Fatori involved troops of 119 Task Force Battalion who were moving back to their battalion headquarters in the border community when their vehicle hit a landmine planted by Boko Haram elements, military sources said while briefing PREMIUM TIMES on the aftermath of the incident.

One soldier was killed and four others were wounded in action in the attack, which occurred between Bosso, Niger Republic and Mallam Fatori, headquarters of Abadam Local Government Area of Borno State. It was not immediately clear whether the wounded have been taken to the hospital in Nigeria or Niger.

The Defence Headquarters announced last week it had taken new delivery of military equipment, boasting of a tough time ahead for insurgents.

The military has said it recorded tremendous gains in its counter-insurgency operations over the past three years, especially after managing to confine the insurgents to the fringes of Nigerian territories.

This was against the years before when the deadly Boko Haram terrorists held vast Nigerian lands across its North-east stronghold, occasionally spilling into North-west and North-central geopolitical zones.